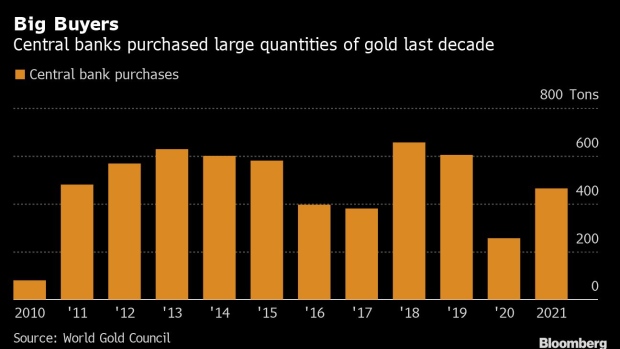 (Bloomberg) -- Gold stored at the Bank of England has been trading at an unusually low price, in a sign that central banks may be shedding some of their holdings.

The Bank of England’s vaults contain 5,676 tons of bullion, one of the largest stockpiles in the world, which it holds on behalf of other central and commercial banks. Gold held by central banks is typically bought and sold between large institutions in bilateral trades at prices usually within a few cents of the market rate.

In recent days, however, gold at the BOE traded as much as a dollar an ounce beneath benchmark London prices, according to traders familiar with the matter. Such a big discount usually indicates a big institution like a central bank selling a sizable amount of reserves to raise US dollars or other currencies, one of the traders said.

Central banks expanded their gold holdings by almost 456 tons in 2021, according to the latest World Gold Council data, in a long-running trend driven by emerging markets diversifying their reserves away from foreign currencies. Notable buyers included Brazil, Thailand and Ireland, which made its first purchase since 2009.

Buying may slow during 2022, with financial institutions looking to hold more interest bearing dollars as the Federal Reserve gears up for aggressive monetary tightening. The greenback is on track for its biggest annual increase in seven years, putting pressure on the currencies and borrowing costs of emerging market nations.

The BOE gold discount has narrowed since the dollar-an-ounce margin, but remains large by normal standards, said the people, who asked not be identified discussing private information. Bullion has slipped more than 12% since peaking in March, leaving it close to unchanged this year.

A spokesperson for the BOE declined to comment on the discount.