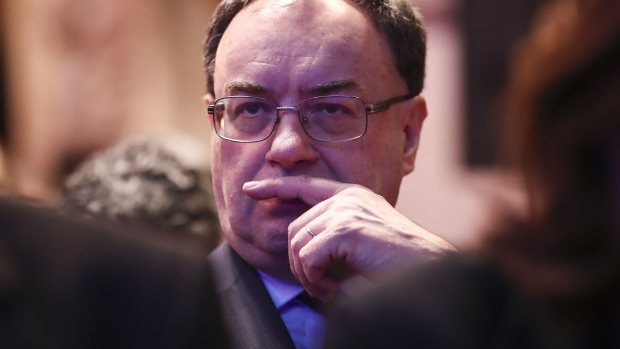 Andrew Bailey, chief executive officer of the Financial Conduct Authority (FCA), attends the launch of the COP26 Private Finance Agenda in London, U.K., on Thursday, Feb. 27, 2020. In a world facing a climate crisis, investors need to start taking account of carbon emissions and rising temperatures in their decisions, according to Bank of England Governor Mark Carney. , Photographer: Bloomberg/Bloomberg

(Bloomberg) -- The Bank of England is pushing for a shakeup of the $6.9 trillion money market fund industry, saying the business amplified strains during the financial crisis and in the Covid-19 pandemic.

The U.K. central bank’s Governor Andrew Bailey said the Financial Stability Board soon will consult on changes to the market, which covers short-term debt securities like commercial paper. At the height of turmoil in the early days of the pandemic, those funds were not resilient, he said.

The remarks including some detailed options for what regulators could do are the clearest sign yet that action is coming for money market funds, which are supposed to have cash-like liquidity but instead froze up when the global system was under strain.

“We are very much in the world of having a second chance to deal with the issue of how to structure money market funds consistent with their role,” Bailey said in a text of a speech to the International Swaps & Derivatives Association.

Bailey said there’s a need to improve the resilience and functioning of the funds so they didn’t contribute to stress in short-term funding markets.

Sterling money market funds saw outflows of around 25 billion pounds ($35 billion), or 10% of their total assets, in the eight days between March 12 and 20 last year -- a period known as the dash for cash.

To mitigate the damage, the BOE and other central banks pumped billions into the financial system in quantitative easing, and also activated repo and other liquidity facilities. Turning “the fire hoses on at full blast” helped bring rates to more normal level, Bailey said.

“The dash for cash provided an unwelcome reminder that the post financial crisis did not finish the job and left a dangerous gap in our exposure to the risk of financial instability,” Bailey said. “We must finish the task this time.”

Bailey suggested a number of possible reforms, including limited asset holdings to government instruments, removing the liquidity mismatch by making funds non-daily dealing, or “a middle option whereby a combination of measures are used to reduce the risks to a sufficiently low level.”

The FSB has said money market funds supporting the economy both by giving investors a cash management tool and working as a source of funding for companies and governments. After 2008, standards were strengthented on valuation, maturities and risk management requirements.

The turmoil in March 2020 mainly hit funds based in the U.S. and European Union, the FSB said. Other jurisdictions did not report a big impact.