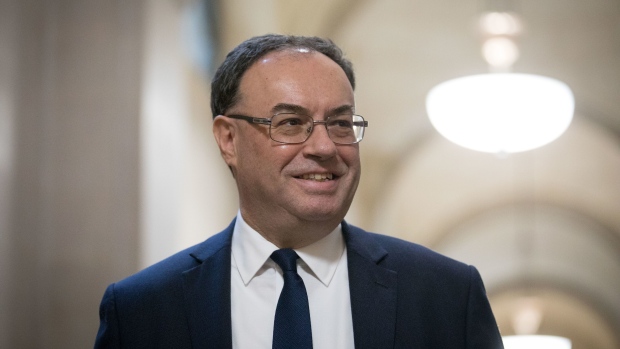 Andrew Bailey, governor of the Bank of England, poses for a photograph on his first day in the post at the central bank in the City of London, U.K., on Monday, March 16, 2020. Bailey knows a few things about crises, which should put him good stead on Monday when he takes the helm of the Bank of England as it tries to stave off recession triggered by the coronavirus pandemic. , Bloomberg

(Bloomberg) -- Bank of England Governor Andrew Bailey rejected accusations that the central bank is improperly funding the government through the bond-buying program it revived to fight the economic damage from the coronavirus.

Bailey also criticized a House of Lords committee for comments the BOE was “addicted” to quantitative easing, saying it was a “poor choice of language.”

Bailey has repeatedly rejected the idea that the BOE is conducting monetary financing -- the direct funding of governments by central banks -- or that it should go down that path. The central bank on Thursday published new guidance on how it would unwind QE, saying it will start once its benchmark rate reaches 0.5%. That’s lower than the previous guidance of 1.5%, suggesting that the exit will start sooner.

Bailey’s comments come just weeks after the publication of a report by the Lords Economic Affairs Committee, “Quantitative easing: a dangerous addiction?” The group, which includes Mervyn King, BOE governor when QE was originally introduced, said the central bank must be more transparent about the policy and justify its usage.“I’m afraid I’m going to be very, very blunt,” Bailey said. “The House of Lords should not use word ‘addicted.’ Frankly that is a word that has a damaging meaning for many people who are suffering. I think it is wrong to use that word loosely.”