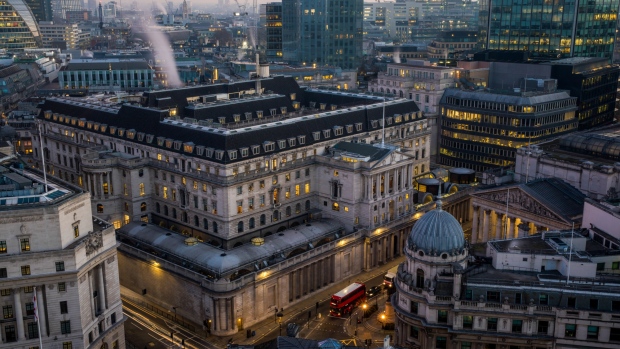 The Bank of England (BOE) stands illuminated at dawn in the City of London, U.K., on Monday, Feb. 25, 2019. The U.K. and U.S. sought to allay fears of disruption in the multitrillion-dollar derivatives market, vowing to put in place emergency policies to ensure trading continues uninterrupted in the event of a no-deal Brexit. , Bloomberg

The Bank of England said more companies are triggering plans for a no-deal Brexit as it kept policy in a holding pattern while the government takes withdrawal talks to the brink.

Around two-thirds of firms surveyed by the central bank said they had started implementing contingencies for a disorderly departure from the European Union. About 80 percent judged themselves ready for such an outcome.

With Britain just days away from its scheduled departure date from the EU, the nation’s future relationship with the bloc is as unclear as ever. Prime Minister Theresa May has asked for a short extension of the timeline, but there’s still a risk that the U.K. could leave without a deal, which would threaten chaos in trade and a sharp drop in the pound.

“Brexit uncertainties had also continued to weigh on confidence and short-term economic activity,” the minutes of the Monetary Policy Committee meeting said. While many firms said they were prepared for no-deal, “companies had also reported that there were limits to the degree of readiness that was feasible in the face of the range of possible outcomes.”

With the cliff-edge so close, the bank’s Monetary Policy Committee, led by Governor Mark Carney, voted 9-0 to hold at 0.75 percent on Thursday, as predicted by all 61 economists in a Bloomberg survey. They signaled they’re in no rush to continue with a series of limited and gradual hikes.

The minutes of the meeting reiterated Carney’s line that Brexit could prompt the central bank to move policy in either direction, but several members of the MPC have since said rates would be more likely to go down than up. Michael Saunders, one of the more hawkish members, said this month he’s doesn’t see a need to move again until the uncertainty of Brexit lifts.

U.K. inflation is below the BOE’s 2 percent target, and the bank sees growth weakening this year amid a Brexit-induced slump in business investment.

The bank’s agents reported a sharp decline in investment intentions in manufacturing, the BOE said. There were indications of stockpiling, though that wouldn’t have a large impact on overall growth. The bank said that first-quarter expansion could accelerate to 0.3 percent.

The bank also said that about 40 percent of companies on a panel expect Brexit uncertainty would be resolved this year. About half see it lasting into next year and beyond.