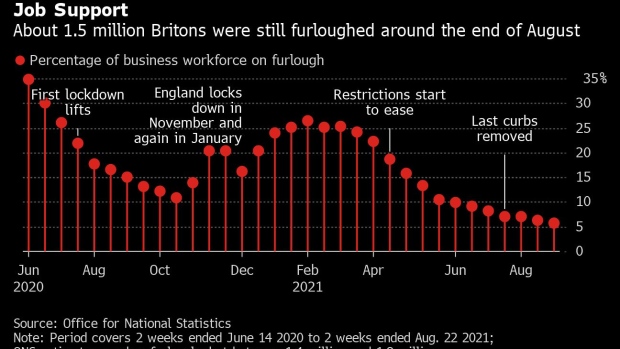 (Bloomberg) -- The Bank of England said the case to tighten U.K. monetary policy is building, as Deputy Governor Dave Ramsden joined Michael Saunders in his push to end bond purchases as soon as possible.

While the Monetary Policy Committee kept the BOE’s ultra-loose monetary policy settings in place as forecast by economists, officials shifted tone on the outlook. Financial markets brought forward bets for an interest-rate increase to March, while the pound strengthened.

Noting the “modest tightening” in policy foreseen over their horizon in August, “some developments during the intervening period appear to have strengthened that case, although considerable uncertainties remain,” officials said in a statement.

The U.K. central bank is trying to tame inflation that accelerated well beyond its forecasts over the summer, reaching 3.2% last month. Its new focus is enabled by stronger-than-expected jobs data that show unemployment will peak well below worst-case scenarios predicted at the onset of the pandemic.

The outlook puts the BOE in the more hawkish camp of advanced-world central banks during a pivotal week for global monetary policy, following the U.S. Federal Reserve’s announcement on Wednesday that officials there may taper bond buying soon, and Norway’s decision to raise its interest rate as part of a whole cycle of planned increases.

The BOE’s own benchmark remained unchanged at a record-low 0.1%, while its stock of asset purchases is set to total 895 billion pounds ($1.2 trillion) by the end of this year. Policy makers led by Governor Andrew Bailey unanimously agreed that any future tightening should start with an interest-rate increase.

Ramsden joined Michael Saunders in pushing to end bond-buying early, a surprise switch that will add to the perception of the BOE shifting its view.

“There was increasing evidence from a range of global and domestic cost and price indicators that inflationary pressures were likely to persist,” the minutes said. “These members judged that, with the existing policy stance, inflation was likely to remain above the 2% target in the medium term.”

The decision was also notable for the participation of the MPC’s two newest members: Huw Pill, the former Goldman Sachs Group Inc. analyst who replaced Andy Haldane as chief economist, and Catherine Mann, a one-time chief economist of the OECD who replaced Gertjan Vlieghe. Both of them voted with the majority on this occasion.

While the BOE’s more hawkish rhetoric follows a noticeable spike in inflation, it also comes against the backdrop of an economic recovery that has shown signs of losing steam amid supply bottlenecks and labor shortages.

Data released on Thursday showed the U.K. had about 5.8% of its workforce on furlough at the start of this month even though that support program is set to expire Sept. 30. September is also shaping up to be the weakest month for private-sector activity since the height of the winter lockdown, IHS Markit said on Thursday.