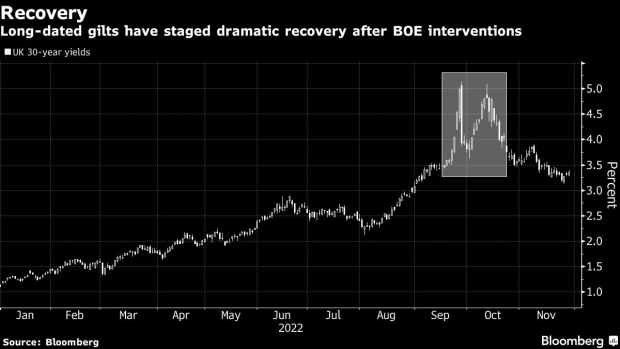 A cyclist rides a Brompton bicycle past the Bank of England, left, and Royal Exchange building, in the City financial district in London, U.K., on Thursday, Dec. 16, 2021. The City of London has transformed from a raucous district with thousands of workers celebrating Christmas into a no-party zone in the space of a week. Photographer: Jason Alden/Bloomberg , Bloomberg

(Bloomberg) -- The Bank of England avoided causing ructions in UK bonds with its latest sale of gilts, after adopting a “demand-led” approach in a market that it sees as not yet back to normal.

The BOE sold £346 million ($415 million) of long-maturity and index-linked debt that it had bought under emergency action to halt a rout that started in late September. Thirty-year bonds edged higher after the result, yet still underperformed shorter tenors.

Analysts had looked to the inaugural sale as a fresh test of investor confidence, given there’s also a deluge of supply from increased government borrowing and the central bank unwinding pandemic-era debt holdings. BOE Governor Andrew Bailey told lawmakers on Tuesday the market is “not back to normal.”

“The BOE accepted over 70% of the bids,” said Megum Muhic, a strategist at RBC Capital Markets. “All in all, it looks like the BOE are quite keen to sell their emergency holdings to stand behind the ‘temporary’ nature of the program.”

The BOE offered the securities depending on market appetite, unlike other gilt sale operations where there is a fixed amount to be raised. It had purchased the bonds under its financial-stability mandate to stave off the risk of what it called “fire-sale” dynamics when pension funds rushed to meet margin calls.

That was sparked by the previous Liz Truss government’s plans for huge unfunded tax cuts. Confidence has since returned to the market, reflected in 30-year gilt yields having fallen over 150 basis points from a late September peak.

The BOE will continue to unwind its £19 billion holdings of securities bought during its intervention through sales on Tuesdays, Wednesdays and Fridays. The central bank said that it would sell debt competitively to bids at the mid price -- the average of dealers’ bidding and asking prices -- or higher, as long as there had not been a “significant” fall in the price ahead of the start of an operation.

RBC’s Muhic noted that a bond maturing in 2071 had continued to be sold by the BOE, despite the fact the yield on the bond had gained over six basis points from Monday’s close. The central bank rejected around £134 million of bids from market participants.

While the market looks stable for now, it’s still facing daily sales over the next two weeks and a longer-term outlook of heavy supply when government issuance is included. Investors will need to absorb a record amount in the next fiscal year, according to some estimates.

“Perhaps the BOE would’ve liked to see higher demand and it will be interesting to see how that evolves over coming days and weeks particularly as we head into December,” said Imogen Bachra, head of UK rates strategy at NatWest Markets.

Liability-driven investors such as pension funds have historically been key buyers of longer-dated and index-linked gilts -- the reason why the BOE intervened in these markets initially -- but some analysts argue that appetite may be starting to diminish.

A surge in buyout activity -- where a corporate pension program is wound up and an insurer takes on future payments to pensioners -- as well as some pension funds maturing could lead to weaker demand going forward, according to HSBC Holdings Plc rates strategist Daniela Russell.

She recommends positioning for 30-year bonds to underperform the equivalent swap rate, returning to a pre-pandemic range of 50-60 basis points. This spread has already widened this week to around 45 basis points currently.

“A tipping point appears to have arrived,” she said. “Appetite from the historically-reliable pension schemes is waning.”