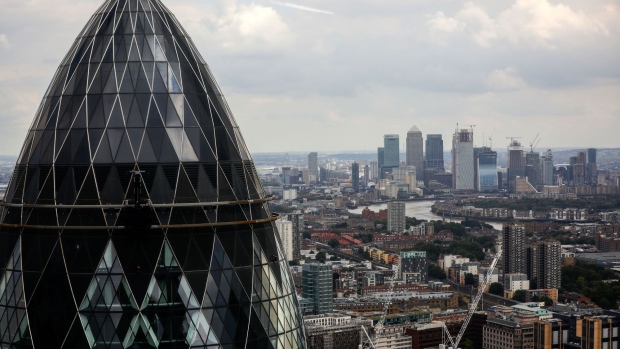 30 St Mary Axe, also known as "the Gherkin," stands in this view from the 22 Bishopsgate office tower construction project in the City of London, U.K., on Friday, Aug. 31, 2018. Axa SA's real estate unit and development partner Lipton Rogers Developments LLP are building the 278-meter (912 foot) Bishopsgate tower, which will become the tallest in the City of London financial district. Photographer: Simon Dawson/Bloomberg , Bloomberg

The Bank of England urged financial businesses to accelerate their transition away from Libor, a discredited benchmark that underpins $300 trillion of contracts including bonds and loans.

Market makers will be encouraged to shift pound-denominated interest-rate swaps on March 2 from Libor to its replacement, the Sterling Overnight Index Average, the central bank said in a statement Thursday. The move is part of a wider effort to speed up transition in the derivatives market before Libor expires the end of 2021.

“This should help make Sonia the market standard in sterling swaps as is already the case in the bond market,” Edwin Schooling Latter, director of markets and wholesale policy at the Financial Conduct Authority, said in a statement.

The BOE in 2017 started the countdown on retiring Libor, which underpins $30 trillion of financial contracts in sterling markets alone. For decades the rate served as a reliable benchmark set daily by banks to determine interest rates on everything from student loans and mortgages to derivatives and credit cards. But ever since European and U.S. banks were found to have manipulated rates to benefit their own portfolios, the benchmark has been seen as tainted.

“Trading in Libor-linked products needs to fall to signal the market is readying for the end of Libor. It probably means lower volatility in times of stress given the removal of the credit component.”

The market for Sonia derivatives is already well established, the BOE said in a joint statement with the Financial Conduct Authority. The average for cleared over-the-counter Sonia swaps exceeded £4.5 trillion ($5.9 trillion) per month over the past six months, and the traded monthly notional value is now broadly equivalent to Sterling Libor.

“The time to act is now,” the BOE said in a statement. “This is a critical year for Libor transition.”

To contact the reporter on this story: William Shaw in London at wshaw20@bloomberg.net