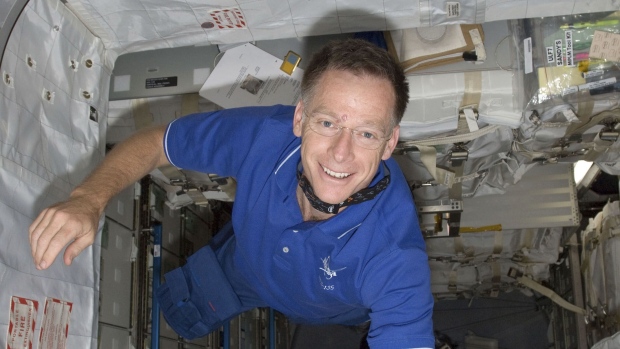 IN SPACE - JULY 17: In this handout image provided by the National Aeronautics and Space Administration (NASA), NASA astronaut Chris Ferguson, STS-135 commander poses in the Raffaello multi-purpose logistics module following the completion of the transfer of supplies to and from the two spacecraft on the International Space Station July 17, 2011 in space. , Photographer: NASA/Getty Images North America

Former NASA astronaut Chris Ferguson removed himself as commander of the first crewed flight of Boeing Co.’s Starliner spacecraft next year as the aerospace giant tries to catch up with Elon Musk’s SpaceX in providing ferry service to the International Space Station.

Ferguson cited personal commitments in a video message posted Wednesday on Twitter, and Boeing confirmed media reports that his family has a wedding planned for next year. Barry “Butch” Wilmore, another veteran astronaut who was named as a backup in July 2018 for the three-person crew, will replace Ferguson on the flight to the space station, which is expected in mid-2021.

Ferguson’s departure from the flight means that Boeing won’t have an employee on the Starliner’s first trip carrying people to the station for the National Aeronautics and Space Administration. He will work as Boeing’s director of mission integration and operations, the company said in a statement. Astronauts Nicole Mann and Mike Fincke will also make the trip.

The Starliner program has experienced multiple delays following a botched test flight in December that revealed software shortcomings. The vehicle’s failure to dock with the space station prompted a deeper NASA inquiry and spurred Boeing to schedule a second test flight without crew, which is expected by year-end or early January.

NASA has set Boeing’s test flight with astronauts for “no earlier than June,” with the first post-certification mission seen in December 2021.

Musk’s Space Exploration Technologies Corp., the other contractor for NASA’s commercial crew program, plans its first regular crew rotation of four astronauts to the ISS with an Oct. 31 launch on its Crew Dragon. SpaceX completed a successful crewed test mission earlier this year.

The Washington Post and Aviation Week reported earlier that Ferguson’s decision was prompted by a family wedding.