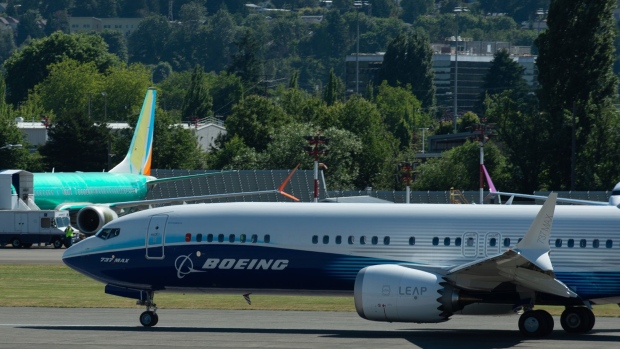 (Bloomberg) -- Boeing Co. burned through just $507 million in cash for the third quarter, far less than the $1.87 billion that Wall Street expected, as it stepped up 737 Max jetliner deliveries and booked a one-time tax benefit.

That was the good news.

The company’s adjusted loss of 60 cents a share and revenue of $15.3 billion billion both missed the average of estimates compiled by Bloomberg. Weighing on the results: a $185 million accounting charge for the latest delay to its Starliner spacecraft along with about $183 million in costs stemming from disrupted production of its 787 Dreamliner. It anticipates spending about $1 billion in total for troubles with the marquee wide-body jet.

The manufacturing titan is working to resolve quality lapses, repair relations with regulators and lighten its debt burden from last year’s travel-market collapse and prolonged grounding of its Max aircraft after two fatal crashes. Restarting Dreamliner deliveries that have been halted for months is key to Boeing’s financial turnaround. But the planemaker must first address quality defects and win regulatory approval.

Douglas Harned, an analyst at Sanford C. Bernstein, estimated before Boeing’s release that the company has about $9 billion in cash tied up in Dreamliners parked around its factories and in desert storage lots.

Boeing shares gained 1.1% to $212.11 before the start of regular trading Wednesday in New York. The stock had declined 2% this year this year through Tuesday while the Dow Jones Industrial Average advanced 17%.