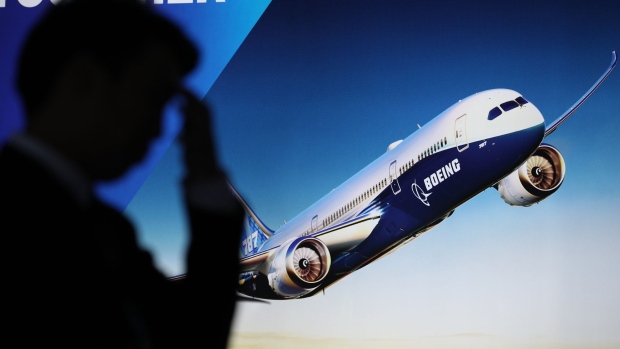 A visitor walks past an advertisement for Boeing Co. during media day at the Seoul International Aerospace & Defense Exhibition (ADEX) at Seoul Airport in Seongnam, South Korea, on Monday, Oct. 14, 2019. The exhibition opens on Oct. 15 and will run through Oct. 20. , Bloomberg

Boeing Co. said it won’t compete for the Pentagon’s program to develop and procure the next-generation intercontinental ballistic missile, leaving Northrop Grumman Corp. as the sole bidder for a project valued at almost US$85 billion.

The announcement Friday made final Boeing’s previous indications that it wouldn’t bid on the program to replace aging Minuteman III ICBMs because it views the request for proposals as heavily skewed to favor Northrop.

“Boeing is disappointed we were unable to submit a bid,” the Chicago-based company said in a statement. “Boeing continues to support a change in acquisition strategy that would bring the best of industry to this national priority and demonstrate value for the American taxpayer.”

The dispute centers on Boeing’s access to technical and pricing information for solid-rocket motors made by Orbital ATK since that company was acquired by Northrop. Leanne Caret, chief executive officer of Boeing’s defense unit, cited issues of “fairness and integrity” in a July letter to the Air Force’s acquisition chief.

With Boeing’s announcement, the Air Force will be under increased pressure from Congress to explain how it will get a fair price from Falls Church, Virginia-based Northrop Grumman.

Air Force spokeswoman Ann Stefanek said in a statement Friday that even though there’s only one bid the service “will proceed with an aggressive and effective sole-source negotiation.”

The new ICBM is part of an initiative to modernize the nation’s nuclear arsenal, begun under President Barack Obama and continued under President Donald Trump, that the Congressional Budget Office projects could cost US$1.2 trillion over 30 years.

The new missile, which will replace the Minuteman III first deployed in the 1970s, will join the Air Force B-21 bomber, also built by Northrop, the Navy’s Columbia-class nuclear submarine and improvements to the B-61 air-dropped nuclear bomb. The program also calls for improved command and control networks.

The request for proposals on the ICBM included options for five production lots. Internal Pentagon cost estimates project US$22.6 billion for research and development spending and US$61.4 billion for procurement.

The winner-take-all work is scheduled to be awarded between July 1 and Sept. 30 of next year and will be the largest contract awarded in 2020, or close to it.