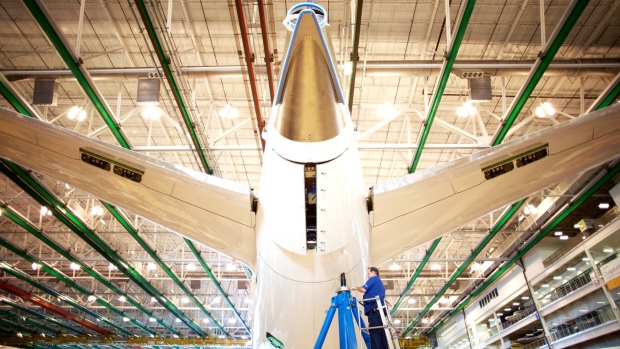 An employee works on the tail of a Boeing Co. Dreamliner 787 plane on the production line at the company's final assembly facility in North Charleston, South Carolina, U.S., on Tuesday, Dec. 6, 2016. On the day President-elect Donald Trump lashed out at Boeing Co. for the cost of replacing Air Force One, mechanics and engineers at the planemaker's South Carolina factory were focused on another challenge: making the first 787-10 Dreamliner. The manufacturer is counting on the newest and longest Dreamliner to help turn its marquee carbon-fiber jet into a cash machine. , Bloomberg

(Bloomberg) -- Boeing Co. received preliminary US regulatory clearance to restart deliveries of its 787 Dreamliner aircraft, paving the way for the end to a drought that drained cash and dented the planemaker’s reputation for quality.

The FAA agreement is a milestone for the company, but it won’t immediately resume sales. Boeing must still make required fixes and get FAA inspectors to approve each aircraft, the people said, asking not to be identified as the information hasn’t been publicly announced. While timing of delivery resumptions remains unclear, the company is aiming to begin in the week of Aug. 8, one of the people said.

A total of 120 of the jets, which retail for as much as $338 million, had been constructed but were parked and waiting for the FAA’s approval to resume sales to customers such as American Airlines Group Inc., according to Boeing.

“We will continue to work transparently with the FAA and our customers towards resuming 787 deliveries,” Boeing said in an e-mailed statement.

The resumption of shipments will mark a financial turnaround for Boeing after years of operational lapses that have frustrated customers, suppliers and investors. It’s also a potential catalyst for Boeing shares, since the Arlington, Virginia-based company will start to unlock nearly $10 billion in cash tied up in Dreamliners stashed around its factories and in desert storage, according to Rob Spingarn, an analyst with Melius Research.

American Airlines on Friday referred to July 21 comments by Chief Financial Officer Derek Kerr, who said on a conference call it expected to receive two 787-8s in “early August,” with the planes not beginning commercial flights until November.

American should receive a total of nine by the end of 2022, he said. American plans to receive four more 787-8s in the first part of 2023. The airline didn’t have any update, a spokeswoman said Friday.

Boeing plans to gradually ramp up production as it reduces the inventory of undelivered 787s, Stan Deal, the company’s commercial chief, said in an interview earlier this month at the Farnborough International Airshow. The aviation titan has been working with suppliers to step up hiring and prepare for the higher tempo, he said.

The chief problem for the 787 had been how the plane’s carbon-fiber fuselage sections were joined, which didn’t meet Boeing’s design specifications but wasn’t deemed to be a safety hazard.

The company’s plan to resume sales also includes addressing how the planemaker constructed the so-called forward pressure bulkhead, the structure near the nose that maintains pressurized atmosphere, and other issues that had arisen during the past year, said one of the people.

(Updates with information on customers starting in fourth paragraph)