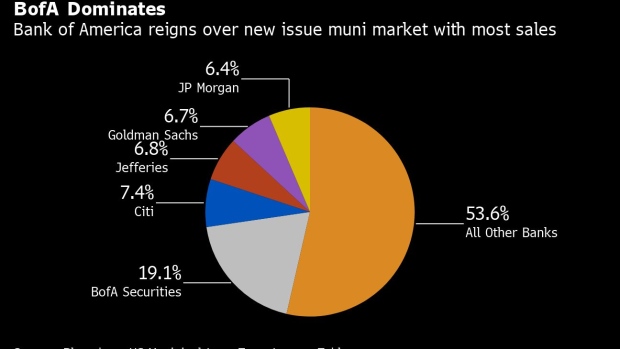 (Bloomberg) -- So far this year, Bank of America Corp. is expanding its dominance in the business of underwriting bonds for America’s states and cities.

The bank has led the sale of $13.2 billion of municipal bonds in 2021, nearly three times as many as its nearest rival, Citigroup Inc., according to data compiled by Bloomberg. That’s 19% of all the long-term state and local government debt that’s been issued -- a bigger market share than Bank of America has had in any full year since at least 2013.

With new debt sales slower at the start of the year, the rankings may reflect the advantages of winning a few of the biggest deals, such as the $1.5 billion issue that Bank of America handled for the Port Authority of New York & New Jersey. And as the year wears on, its market share may fall as the volume of new deals rises and competitors potentially catch up.

But the scale of its lead since January underscores how much the bank has come to dominate the $3.9 trillion municipal-bond market, leaving other Wall Street rivals reduced to competing for second place. Bank of America has been the top municipal underwriter since at least 2013 and last year handled $62 billion of such securities offerings, 14% of the market and about $16 billion more than No. 2 ranked Citigroup, data compiled by Bloomberg shows.

With the volume of sales slowing from last year’s pace, Bank of America has been bidding aggressively against competitors to secure debt issued in auctions, instead of relying on so-called negotiated deals in which the bank is hired in advance. It has won about 27% of all municipal bond issues sold by competitive bidding in 2021, up from 16% last year.

“It’s particularly impressive here that it’s the same number one ranked manager for competitive and negotiated” sales, said Patrick Luby, a municipal debt strategist with CreditSights. “That suggests a strong commitment to our marketplace.”