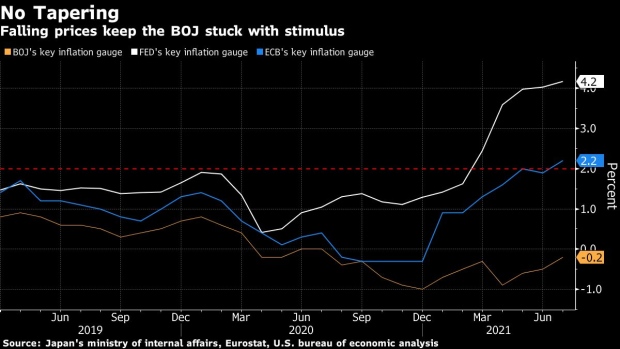 The Bank of Japan held its key stimulus tools in place while flagging Covid-linked pressures on the economy ahead of a key ruling party election that is almost certain to determine the country’s next prime minister. The BOJ kept its negative interest rate and asset-buying targets unchanged Wednesday, as widely expected by economists. The bank trimmed its view of exports and production to reflect the hit to supply chains from the latest virus wave while keeping its overall view of the economy unchanged.

The central bank also unveiled more details of its green lending program. The BOJ said it would immediately start accepting applications and would begin making the loans in December.

The stand-pat decision comes a week before a ruling party election to pick Prime Minister Yoshihide Suga’s successor. The new leader of the Liberal Democratic Party is expected to put together a stimulus package to help the economy, still in a state of emergency, get back on a firmer recovery track.

“I don’t think the BOJ is trying to nudge a new LDP leader into compiling a massive economic package, but whoever wins the election, the size of fiscal spending will be at least 30 trillion yen ($274 billion). They have a national election to fight,” said Yuichi Kodama, chief economist at Meiji Yasuda Research Institute.

The power of production and exports to drive the recovery is weakening so consumer spending will be key in driving the economy going ahead, Kodama said. “With vaccination progress, consumer spending could start picking up later this year, but that also depends on the Covid situation,” he added.

A weak inflation pulse is also trapping the BOJ in a holding-pattern on stimulus while the Federal Reserve and other central banks start to or consider reining in their pandemic measures. In a busy week for central banks, the Fed concludes its own meeting just hours after the BOJ gathering and is likely to offer clues about its tapering plans that could keep downward pressure on the yen or lead to a short-term lift depending on how sanguine Jerome Powell is on the economy.

The LDP prepares next week to pick a new leader who, due to the party’s dominance in parliament, will almost certainly become the next prime minister.

Economists don’t see a new administration putting any immediate pressure on the BOJ to shift policy, especially while the pandemic rages on, but that could change later. Front runner Taro Kono, Japan’s vaccine czar, sees the BOJ’s 2% target as very hard to hit.

“If the government decides to change its accord with the BOJ things will be different, but in principle what the BOJ needs to do isn’t really going to change,” said economist Harumi Taguchi at IHS Markit.

“The Bank of Japan probably has little choice but to keep stimulus at the current magnitude, given tough economic conditions... Its green policy shows it’s experimenting with new approaches, but the thrust of its stimulus policy is unlikely to change much in the foreseeable future.”

At the end of the month, Kuroda will become the BOJ’s longest-running governor, an outcome that reflects his ability to keep political and market pressure at bay more than his success in generating inflation.

Kuroda and His Monetary Experiment Roll On in Record BOJ Tenure

Since the BOJ last met in July, Japan suffered its worst wave of the pandemic yet. Another state of emergency was extended through September and the spread of the delta variant has scared consumers, even though case numbers have dropped in recent weeks and more than half the population is now vaccinated.

Conditions have also deteriorated for the manufacturers that have powered the recovery. Toyota Motor Corp. and other Japanese automakers have announced factory stoppages due to shortages of semiconductors and other parts as the impact of Covid crimps Asia’s supply networks. Some BOJ board members have hinted that the bank may need to cut its growth forecast in an outlook report due next month.