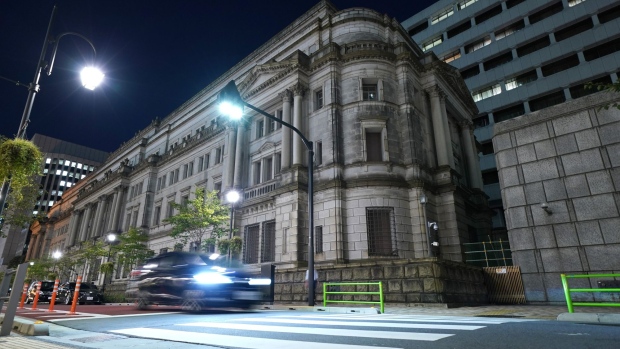 The Bank of Japan (BOJ) headquarters at night in Tokyo, Japan, on Sept. 27, 2021. The Bank of Japan will release its quarterly Tankan business sentiment survey on Oct. 1. Photographer: Toru Hanai/Bloomberg , Bloomberg

(Bloomberg) -- The Bank of Japan and Financial Services Agency are assessing if local financial institutions have any remaining Libor-linked contracts that will be difficult to shift to alternative interest rates before the benchmark expires, according to people familiar with the matter.

The two authorities are conducting a survey over tough legacy contracts to make sure the transition away from Libor before the end of the year will be orderly, according to the people. Banks or securities firms will be among those institutions asked to provide details of the contracts if they still have any, the people said.

An interest rate-transition panel led by the central bank said last month that it hadn’t found any specific contracts that can’t be moved away from Libor before the deadline, but it didn’t rule out the possibility that some could still exist.

The survey shows that Japanese authorities remain wary of problems emerging over the transition away from the benchmark even though the process has been relatively smooth so far.

The FSA is checking with major financial institutions on their progress in transitioning from Libor in line with the financial regulator’s Strategic Priorities, an agency official said.

The results of the FSA and central bank survey will be assessed and continued support will be offered to market participants, according to a BOJ official.

Japan’s financial institutions will be allowed to use synthetic Libor rates if they can’t meet the end of December deadline. Still, the BOJ and FSA have clearly signaled that’s not a desirable outcome given the rate isn’t the same as Libor and the publication of the synthetic rate is scheduled only for one year.