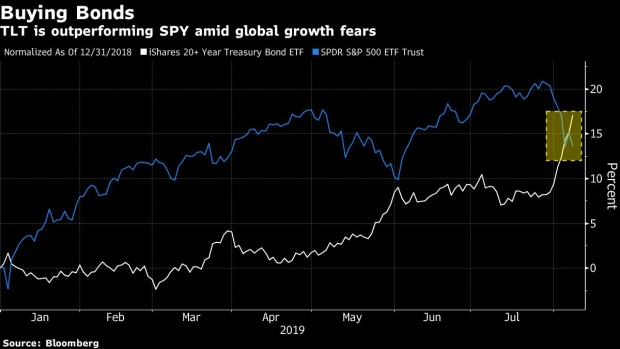 The stampede into haven assets has been so swift that an exchange-traded fund focused on long-term Treasuries is notching up its biggest advance in eight years.

A nine-day rally of about 8.5 per cent for the iShares 20+ Year Treasury Bond ETF, or TLT, is the largest since the U.S. government debt was downgraded in August 2011, data compiled by Bloomberg show. The winning streak is also the longest since 2006. What’s more, the surge has put the fund ahead of the biggest ETF that tracks U.S. stocks, which has tumbled around 5 per cent over the same period.

Trade war angst and concern of a global slowdown have fueled a furious rally in bonds. Treasury 30-year yields are closing in on their lowest level ever, while those on 10-year notes are hovering around the least since 2016. In a sign that a recession could be in the offing, the difference between yields on 10-year and three-month notes has reached its most inverted level since 2007.

​“Investors are in a flight-to-safety mode,” said Dennis Debusschere, head of portfolio strategy at Evercore ISI. “The Chinese renminbi went to new lows this morning and Trump has tweeted they’ll keep on going on trade and eventually we’re going to win. As long as that is the rhetoric, it’s likely that Treasuries will outperform stocks.”

Inflows into TLT have outpaced SPDR S&P 500 ETF Trust’s this year with the debt fund absorbing about US$4.2 billion, the most since it started trading in 2002. The SPY fund, meanwhile, has seen outflows of more than US$20 billion despite the S&P 500’s 14 per cent gain this year. The stock benchmark fell 0.7 per cent at 12:59 p.m. on Wednesday in New York.

“Bond markets are reacting in real time to what they’re seeing overseas markets do and the equity market, in this case, is following suit,” said Chris Zaccarelli, chief investment officer for Independent Advisor Alliance.