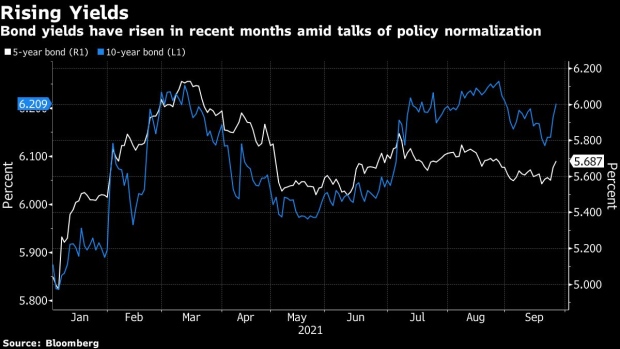 A customer shops at a wholesale vegetable market in Chennai, India, on Thursday, Sept. 23, 2021. Indian finance ministry officials plan to pitch for a sovereign rating upgrade from Moody’s Investors Service when it meets with the firm, scheduled for Sept. 28, according to people familiar with the matter. Photographer: Anindito Mukherjee/Bloomberg , Bloomberg

(Bloomberg) -- Bonds in India may be poised for gains after the government refrained from adding to its near-record borrowing plan for the year, bringing relief to the market battered by rising Treasury yields and oil prices.

The administration will adhere to its plan to borrow 12.05 trillion rupees ($163 billion) in the year through March, the finance ministry said in a statement Monday. Finance Minister Nirmala Sitharaman had earlier indicated that the government may borrow about 1.6 trillion rupees extra, which led to traders expecting higher sales for the second half.

The news may support the domestic bond market weighed by the surge in U.S. Treasury yields on rising bets for the Federal Reserve to start tapering stimulus soon. Market focus will now shift to a key index review by FTSE Russell for the nation’s bonds on Thursday and any potential inclusion will trigger a rally.

“The market would be quite relieved that the government is not changing its borrowing program,” said Harish Agarwal, fixed-income trader at FirstRand Bank. “It will definitely have some positive impact, with U.S. Treasury yields touching 1.5%, which is negative for the market.”

The yield on India’s benchmark 10-year bond has risen nine basis points to 6.21% over the last four sessions to its highest in a month as rising crude prices threaten to exacerbate inflation in the net oil importing nation.

The Reserve Bank of India’s withdrawal of liquidity from the banking system has further weighed on sovereign debt. The central bank has started making its bond purchase program liquidity-neutral since last week by including an equivalent sell leg to the auctions. It has also started shorter variable rate repo auctions to modulate shorter-term liquidity.

“Based on the borrowing calendar, we expect government bond yields to open gap-down by at least 10 basis points,” said Aditi Nayar, chief economist at ICRA Ltd. “The 10-year yield is likely to range between 6%-6.2% in the coming quarter, with rising crude oil prices to counteract the benign borrowing figures.”

The table below shows break-up of second half supply:

Finance Minister Nirmala Sitharaman said in May that the government will borrow about 1.6 trillion rupees additional on behalf of states to compensate them for the shortfall in the goods and services tax revenues. Instead of extra borrowings, the central government passed 750 billion rupees from their own borrowings due to improved revenues in the first half.