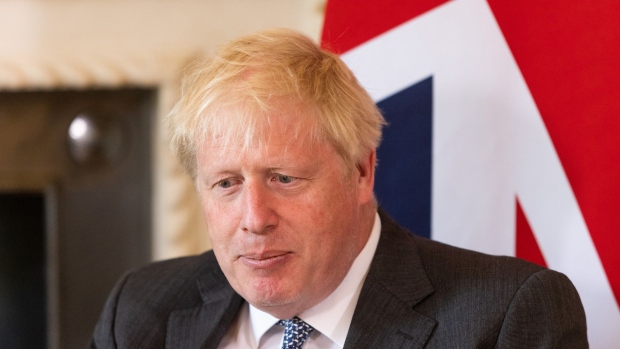 Boris Johnson, UK prime minister, ahead of a bilateral meeting with Antonio Costa, Portugal's prime minister, at 10 Downing Street in London, UK, on Monday, June 13, 2022. Johnson risks reopening divisions that tore his Conservative Party apart in 2019, with his government set to propose a law that would let UK ministers override parts of the Brexit deal he signed with the European Union. Photographer: Chris Ratcliffe/Bloomberg , Bloomberg

(Bloomberg) -- Boris Johnson said he would be “absolutely amazed” if Vladimir Putin attends the Group of 20 summit in Indonesia in November, calling the Russian president a “pariah figure.”

Both Putin and Ukrainian President Volodymyr Zelenskiy have been invited to the G-20 gathering in Bali by Indonesia’s president Joko Widodo. Russia has been heavily sanctioned by some G-20 states over its war in Ukraine.

“I think he’s highly unlikely to go for all sorts of reasons,” Johnson told reporters Tuesday on a flight to the NATO summit in Madrid.

He also warned that any boycott by Western nations if Putin does go would just leave the floor to Russia and China. “If you vacate something like the G-20, you risk just handing the propaganda opportunity to others,” he said.

Johnson later claimed Putin would not have invaded Ukraine if he were a woman, telling German broadcaster ZDF the Russian leader’s war in Ukraine was a “perfect example of toxic masculinity.”

He was backed by his UK Defence Secretary Ben Wallace on Wednesday, who told LBC Radio that Putin had “small man syndrome.”