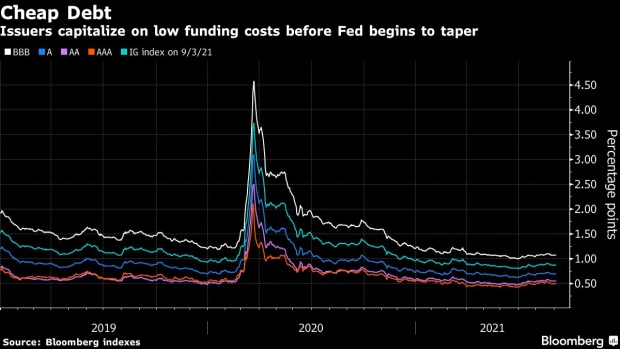 (Bloomberg) -- Corporate America is rushing to sell bonds in a post-Labor Day borrowing binge unlike any in recent memory.

Caterpillar Inc. is leading at least 21 companies tapping the U.S. investment-grade market, putting Tuesday among the busiest days ever by deal count. Other names looking to issue new debt include Home Depot Inc. and the financing arm of American Honda Motor Co.

The week after Labor Day is normally one of the busiest of the year. Forty-six issuers sold over $68 billion the same period last year. Wall Street investment-grade syndicate desks are projecting between $40 billion to $45 billion for this week, with about half of the volume expected to come during Tuesday’s session. The dealers are calling for $130 billion to $140 billion for the month.

“Issuers want to take advantage of the open window between the August holiday, and the potential for taper-induced volatility later in the year,” said Gregory Staples, head of fixed income at DWS North America. “Levels are tight and investors have cash, so there is no reason to wait.”

Walmart Inc. is expected to hold a call with sustainability-focused credit investors in connection with its recently published green financing framework.

Issuers are taking advantage of an attractive funding environment. Borrowing costs are expected to rise when the Federal Reserve begins tapering its support for financial markets, and U.S. benchmark Treasury yields climbed to the highest level in weeks ahead of the sale of $120 billion of debt starting Tuesday.

In high-yield, just two deals hit the market from pizza company Papa John’s International Inc. and specialty chemicals supplier Solenis. But Wall Street estimates for September sales range from $35 billion to $60 billion, according to six banks surveyed by Bloomberg, with offerings likely to include a growing pipeline of acquisitions and leveraged buyouts.

If the high end of junk-bond projections is hit, that would far exceed the $47 billion issued in September of 2020, and would be the busiest month of this year, according to data compiled by Bloomberg.

“While we are expecting a busy month of new issuance after a quiet end to August, between a late Labor Day and Rosh Hashanah it looks like a slow start to the month,” said Ken Monaghan, co-head of high-yield at Amundi US.

Bonds in Mexican state oil giant Petroleos Mexicanos rallied to the highest since June 14 after President Andres Manuel Lopez Obrador said the nation has begun a process of refinancing the company’s debt after receiving a $12 billion transfer from the International Monetary Fund.

Europe’s bankers continued to fire out deals on Tuesday with 17 transactions in the region’s primary market.

A handful of dollar deals were announced on Tuesday morning following the U.S. Labor Day holiday.