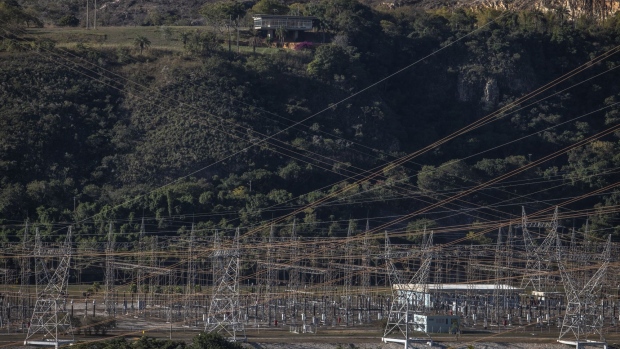 Power lines connected to the Centrais Eletricas Brasileiras SA (Eletrobras) Furnas hydroelectric dam during a drought in Furnas, Minas Gerais state, Brazil, on Monday, June 28, 2021. Brazil issued a provisional measure to authorize exceptional and temporary efforts to optimize the use of hydro-energy resources and secure energy supply as Brazil faces one of its worst water crisis. , Bloomberg

(Bloomberg) -- Brazil’s state-controlled utility Eletrobras has launched what may be one of the nation’s largest equity deals on record and lead to the privatization of the power company.

Centrais Eletricas Brasileiras SA, as the Rio de Janeiro-based firm is formally known, and Brazil’s development bank BNDES are offering a combined 697,476,856 shares, according to a filing Friday. If the over-allotment is fully sold, it could add as much as 104,621,528 shares to the deal.

The sale could raise as much as about 35 billion reais ($7.4 billion) based on the stock’s Thursday close. That would make it Brazil’s second-largest on record, trailing only the $70 billion offering of Petrobras stock in 2010, Bloomberg data show.

The government’s stake in the utility is expected to fall to less than 50% of voting stock after the offering, which is set to price on June 9, according to the filing.

President Jair Bolsonaro has pledged to divest state assets since his 2018 election, but the slow pace of the privatization agenda has led to the departure of key officials in the past years, including privatizations czar Salim Mattar and Eletrobras’s chief official. Brazil unveiled plans to privatize the company in 2017, under then-president Michel Temer.

A group of investors has signaled early interest in scooping up about 13 billion reais in shares, people familiar with the matter said citing talks between banks and potential buyers ahead of the offering’s formal launch.