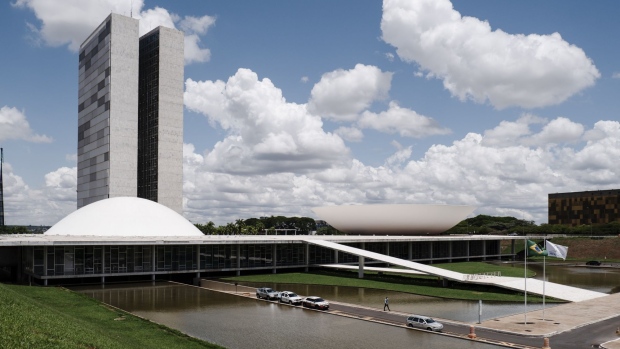 The National Congress of Brazil in Brasilia, Brazil, on Tuesday, Oct. 26, 2021. Brazil senators said Jair Bolsonaro should be charged for nine crimes, including charlatanism, malfeasance and crimes against humanity in their conclusion of a probe into the government’s handling of the pandemic that’s unlikely to have any short-term impact on the president’s political fate. Photographer: Gustavo Minas/Bloomberg , Bloomberg

(Bloomberg) -- After a series of delays and changes to the text, Brazil’s Senate approved the court-ordered payment bill, the so-called Precatorios Bill, that loosens the country’s fiscal austerity law, making room in the budget for the new social program that President Jair Bolsonaro is launching ahead of his re-election campaign next year.

Changes were introduced by senators, so the bill will have to return to the lower house, where lawmakers who have already passed it will analyze its latest version. The bill needs their approval again to become law.

Lower House speaker Arthur Lira, who met with Senate president Rodrigo Pacheco, said there will be maximum effort among the two houses to get a common text enacted as quickly as possible. What is not agreed upon goes back to committees in the lower house next year, Lira told reporters.

Economy Minister Paulo Guedes backed the measure and said that there is no lack of fiscal control in Brazil. According to him, the bill was a lesser harm than other alternatives raised.

Former judge Sergio Moro sought out the former Supreme Court justice Joaquim Barbosa to talk about the 2022 elections, says O Globo. Moro’s party Podemos mulls Barbosa as vice president or running for the Senate next year. The possible alliance between the former Sao Paulo governor Geraldo Alckmin, who is leaving the PSDB party, and the former president Luiz Inacio Lula da Silva has displeased some sectors of the Brazilian left wing, such as the PSOL party, according to another report by the newspaper.

Rio de Janeiro city expands proof of vaccination requirements to more services and establishments as of today, according to a note published by city hall.

States and the Federal District administered 313,847,280 shots against Covid-19, of which 140,294,099 correspond to 2nd doses or single dose vaccines, according to the latest data available disclosed by the 27 local governments.