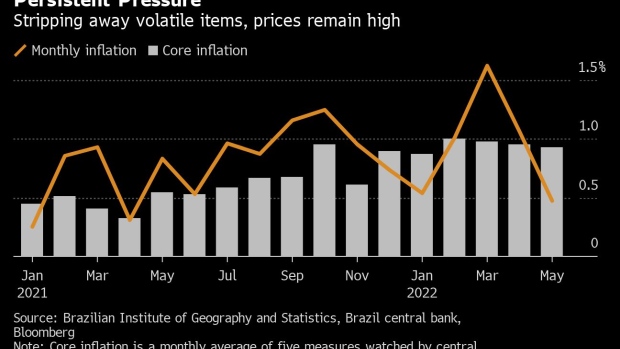 A shopper buys produce at an outdoor market in the Tijuca neighborhood of Rio de Janeiro, Brazil, on Tuesday, April 5, 2022. Although Brazil's central bank is months into an aggressive tightening campaign, the country's inflation rate was still 11.3% in March. , Bloomberg

(Bloomberg) -- Brazil’s central bank raised its key interest rate by half a percentage point and signaled a hike of equal or smaller magnitude for its next meeting, as policy makers juggle above-target inflation expectations and waning economic growth.

The bank’s board lifted the Selic to 13.25% on Wednesday, as expected by 39 of 41 analysts in a Bloomberg survey. The other two saw a larger boost of 75 basis points. Policy makers have added 11.25 percentage points to rates since March 2021.

“For its next meeting, the Committee foresees a new adjustment, of the same or lower magnitude,” policy makers said in a statement accompanying their decision.  “The Committee stresses that the growing uncertainty of the current scenario, coupled with the advanced stage of the current monetary policy cycle, and its impacts yet to be observed, require additional caution in its actions.”

The central bank, led by Roberto Campos Neto, is grappling with more expensive food and energy, which have kept annual inflation above 10% since September. While economic growth remains subdued and price increases eased in May, forecasts for the next few years are still above target. Policy makers must also weigh congressional proposals that would lower fuel costs this year but add to inflationary pressures in 2023.

Read More: Brazil’s Rate Is Headed to 14% From Just 2% in Depth of Pandemic

“The overall outlook remains difficult,” Lucas Vilela, an economist at Credit Suisse, said before the decision. Inflation expectations will likely plateau in coming months as policy makers gradually shift their focus to 2024, he said.

Brazil’s rate hike came hours after the Federal Reserve raised its key rate by 75 basis points -- the biggest increase since 1994 -- and Chair Jerome Powell said officials could move by that much again next month or deliver a smaller half-point boost. In Latin America, Mexico’s central bank is mulling a record rate increase of 75 basis points at its June 23 policy meeting.

Inflation is one of President Jair Bolsonaro’s main headaches as he runs for re-election in October, with Brazilians increasingly blaming him for spikes in the cost of living. In a bid to cushion the blow, his government is asking supermarkets to hold down prices, besides pushing legislation that would reduce fuel taxes.

Policy makers have expressed concern that higher rates will be a drag on growth. Brazil’s gross domestic product expanded less than expected in the first quarter in what was likely the high-water mark for activity this year.

Outstanding consumer debt remains at record levels with analysts warning about rising default rates. Unemployment is sliding but informality is high and wage increases have failed to make up for lost purchasing power.