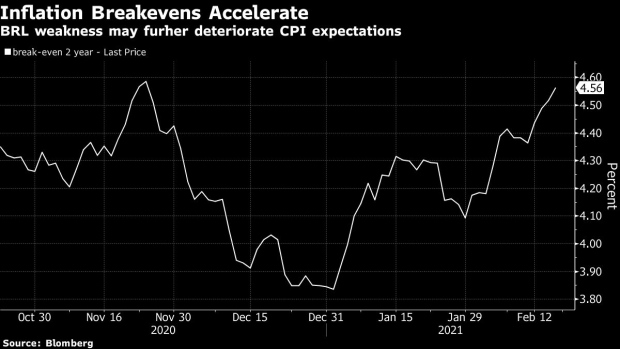 (Bloomberg) -- Brazil’s market selloff put the central bank in a tough position and raised the stakes for its next policy meeting.

The monetary authority’s independence will be put to the test after Jair Bolsonaro replaced Petrobras’ chief executive officer on Friday following a feud over fuel prices, triggering a slump in local assets. While traders are increasing bets on a more aggressive rate hike in March, the government may pressure officials to keep rates low for longer as the economy struggles to rebound.

“I think they have to deliver at least a 50 basis point hike,” said Gustavo Pessoa, partner and money manager at Legacy Capital in Sao Paulo. “Otherwise, the currency will depreciate much further.”

Brazil’s swap rates are moving toward fully pricing in a half-percentage point rate hike in March. Rates jumped 11 to 22 basis points on Monday, leading the curve to price a 42 bps increase in the next central bank meeting, from 38 bps on Friday. The Brazilian real fell 2.3%, leading losses among major currencies.

Traders are adjusting their positions to the view that Bolsonaro is likely to ditch Economy Minister Paulo Guedes’ plans and adopt measures for short-term political gain as his approval rating falls. Bolsonaro’s move on Petrobras was seen as a signal of populism as recent fuel price increases followed moves in international markets and had been praised by analysts.

This means it will be difficult for policy makers to reach a consensus next month. The economy is still struggling to gain traction and the government may put pressure on officials to postpone a rate hike. Brazil’s retail sales data are the latest example of the economy’s fragility as they rose 1.2% in December, disappointing economists who expected a 5.5% expansion.

On top of that, there’s inflation. The two-year inflation breakeven rose to 4.56% from 3.84% in December amid signals the government will deliver a new round of emergency aid payments to informal workers despite concern on the country’s fiscal outlook. A XP Inc. poll published yesterday showed 60% of the investors polled don’t expect the government to respect the spending cap rule, versus 32% in January.