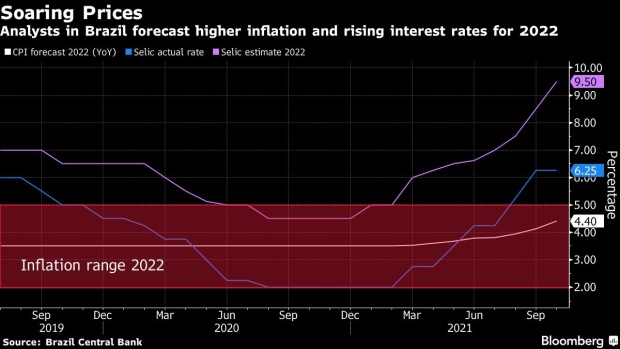 Most economists agree on the need to step up an already aggressive monetary tightening campaign, but are divided over how dramatic the increase will be. The majority of the 47 analysts surveyed by Bloomberg expect the benchmark Selic to jump by 150 basis points to 7.75%. Thirteen project a hike of 125 basis points, while five still see a third straight full percentage point rise.

The central bank, led by Roberto Campos Neto, has reasons to become even more hawkish after the government said it would bypass spending rules to boost handouts to the poor ahead of next year’s election. The news rattled investors and prompted the real to plunge last week. It also complicated an inflation outlook that’s already pressured by higher costs of food, electricity and fuel.

Policy makers had previously signaled plans for a full percentage point hike at this week’s meeting. Many economists now consider a move of such magnitude insufficient to clamp down on inflation that’s running at more than 10% a year, particularly as fiscal concerns send consumer price forecasts above target through 2024.

“We have increased our forecast to a 150 basis-point hike in Brazil’s policy rate to 7.75% at Wednesday’s central bank meeting, up from 100 basis points previously. How the BCB justifies its move will matter as much as the rate decision. The government’s new tack on spending puts the focus on whether the BCB will reaffirm its commitment to the inflation target and establish hawkish credentials amid rising uncertainty. It has several paths to do so.”

Wednesday’s decision will be published on the central bank’s website after 6:30 pm local time in Brasilia, together with a statement from the bank’s board. These are the key things to look for:

While most wagers are on a rate boost of 150 basis points, some traders are betting on a hike of as much as 2 percentage points, according to options traded at the local stock market. The last time policy makers delivered an increase of more than 100 basis points was in late 2002, when markets panicked as Luiz Inacio Lula da Silva was about to assume the presidency.

In the face of new social spending, the view is that the bank board’s best option is to act with greater haste on rates, showing it will deliver on its pledge to do what it takes to bring inflation back to target. Consumer prices rose 1.2% in mid-October from the month prior, more than all forecasts in a Bloomberg survey and the highest print for that period since 1995.

Investors will pay close attention to the language used by the central bank to describe Brazil’s fiscal outlook. At their last meeting, policy makers said further extensions of fiscal stimulus given during the pandemic “may pressure the country’s risk premium.” Now, as financial markets wait for details on how much money the government plans to spend above the spending cap rule, most analysts expect a harsher tone.

“The fiscal outlook central bankers had worked with up until now doesn’t exist anymore,” said Caio Megale, chief economist at XP Inc. He is betting on further depreciation of the real, faster inflation and a higher Selic at the end of the monetary tightening cycle.

The monetary authority is likely to indicate the size of the borrowing cost hike it will deliver at its final meeting of the year in December. Policy makers could also give hints as to where the interest rate might go in 2022. Analysts will look to the bank’s latest consumer price projections, as well as any indication that the bank is starting to focus more on 2023 inflation -- a sign that it’s giving up on next year’s target.