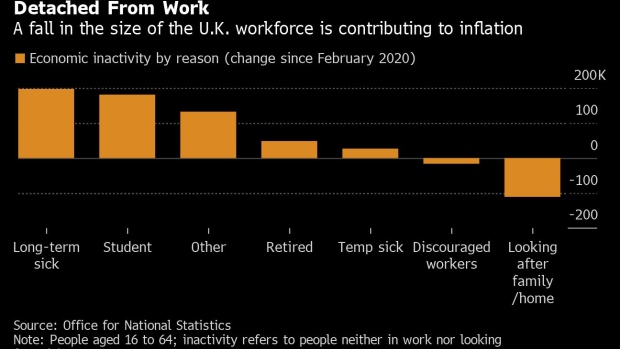 Morning commuters on London Bridge in City of London, UK, on Monday, May 16, 2022. The Office for National Statistics (ONS) will release the latest UK Labor Market Statistics on Tuesday. , Bloomberg

Wages in the UK are rising, and employers are paying bonuses to recruit workers in a scarce market. Yet people who left the labor market during the pandemic are staying away.

Official figures on Tuesday show almost half a million more people are inactive -- neither in work nor looking for a job -- than before the pandemic struck. It means the workforce has shrunk by almost 2%. In the first quarter, the country put in 11 million fewer hours of work than at the start of 2020.

The jump in inactivity is contributing to inflation and tightening the labor market, which recorded the lowest unemployment level since 1974. Bank of England policy makers admit to being surprise by that shift.

In testimony to lawmakers on Monday, Governor Andrew Bailey said he had expected people to return to the workforce, driven by the opportunities provided by a recovering economy.

That could still happen. With households facing a brutal cost of living crisis, some may be forced back to work to help pay the bills. However, there is no sign movement yet.

One reason is that the exodus has been driven by older workers. Many may be suffering long-Covid symptoms or other health conditions and are fearful of returning to work when coronavirus is still spreading.

“While long-term unemployment is falling, there are no signs that the pandemic-induced rise in inactivity is reversing,” the Resolution Foundation think tank said.

Britain has also experienced a sharp loss of European Union workers. Many left when the pandemic closed hospitality and retail businesses, and Brexit has made it harder for them to return.

The Office for National Statistics said there were 110,000 fewer EU nationals employed in the UK between January and March than at the end of 2019.