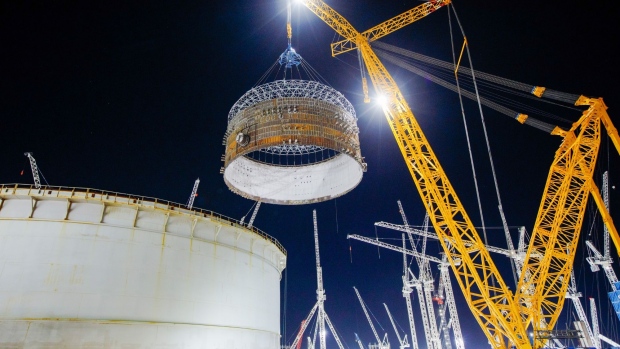 A crane lifts a prefabricated steel containment ring into position at the nuclear Reactor Unit 1, at Hinkley Point C nuclear power station construction site, near Bridgwater, U.K., on Thursday, Dec. 17, 2020. The world's largest crane, affectionately known as “Big Carl,” hoisted the first of three massive steel rings that will encase one of the reactors at Electricite de France SA's nuclear construction site in the U.K., a key milestone in getting the project completed on time. , Bloomberg

(Bloomberg) -- Electricite de France SA said the completion of its flagship British nuclear plant project will be delayed at least six months and cost about 500 million pounds ($687 billion) more than previously planned because of the coronavirus pandemic.

The French state-controlled utility warned last year that such risks had risen as Covid-19 slowed construction of the two reactors it’s building with its Chinese partner at Hinkley Point in Southwest England.

The project completion cost at Hinkley Point C is now estimated at 22 billion to 23 billion pounds, half a billion more than estimated in 2019, EDF said in a statement Wednesday. The first reactor will begin producing power in June 2026, compared with end-2025 as initially announced in 2016, it said.

The delay and cost overruns will trim EDF’s projected rate of return on the project. The French company reiterated that units 1 and 2 still face a potential delay of 15 and 9 months, respectively, which might result in additional costs of about 700 million pounds.