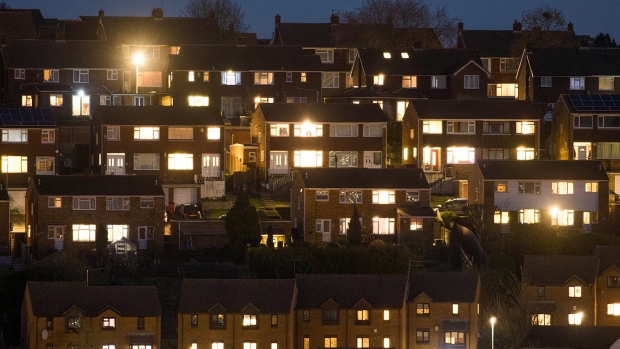 Lights illuminate the windows in residential properties in High Wycombe, U.K., on Monday, April 6, 2020. Among the decisions that my need to be made in U.K. Prime Minister Boris Johnson's absence are whether and when to tighten, extend or lift the current lockdown, which has seen all bars, restaurants and all non-essential shops closed, and people urged to work from home where they can. Photographer: Chris Ratcliffe/Bloomberg , Bloomberg

(Bloomberg) -- Britons responded to the coronavirus crisis by slashing spending and saving more as the economy slipped into what may be the deepest slump in at least a century.Households saved more of their disposable income in the first quarter than at any time for three years, thanks in part to the closure of all but essential stores after the country went into lockdown on March 23.With government wage subsides meaning that furloughed working are experiencing only a limited loss of income, the saving rate – which reached 8.6% last quarter – is expected to climb further. How quickly the economy bounces back will largely be determined by whether people feel confident enough to spend their spare cash as the lockdown restrictions ease.The Office for National Statistics said Tuesday the economy shrank by 2.2%, slightly more than the 2% previously estimated, but the real damage inflicted by the pandemic came in the second quarter. Gross domestic product shrank by over 20% in April and jobless claims soared, leaving many Britons worried about the future.

The data come as Boris Johnson prepares to set out his plans to revive the economy. In a major policy speech, the prime minister will promise to “ build, build, build” with 5 billion pounds of accelerated investment in roads schools and hospitals.Separate figures showed the current account deficit widened to 21.1 billion pounds ($26 billion) in the first quarter, the equivalent of 3.8% of GDP.