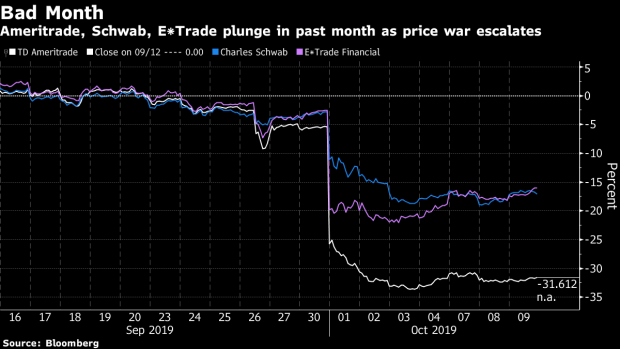 (Bloomberg) -- Investors can “breathe a sigh of relief” as Fidelity Investments matched rivals instead of escalating a recent price war, according to Morgan Stanley.

Shares of TD Ameritrade Holding Corp. jumped 2.9% in pre-market trading, while Charles Schwab Corp. rose 1.8% and E*Trade Financial Corp. gained 2.3%. TD Ameritrade has plunged 31% in the past month, while Schwab and E*Trade have both tumbled 15%, as brokers gave up on commissions.

“Product pricing is now in-line across e-brokers and Fidelity and removes a near-term overhang,” Morgan Stanley analyst Michael Cyprys wrote in a note. He flagged Fidelity leaving its contract fee on options at 65c per contract, and said, “fears around margin lending going to zero are well overdone.”

Cyprys added that Fidelity highlighting its money fund sweep option, which pays a higher yield on customer cash balances than bank sweep offerings at Schwab, TD Ameritrade and E*Trade isn’t new. “They’ve been touting this for a while now, and concerns around this are already reflected in the price for Schwab,” he said.

Last week, Cyprys had said that he saw a higher probability Fidelity would reduce prices after E*Trade, TD Ameritrade and Schwab slashed commissions to zero.

To contact the editors responsible for this story: Catherine Larkin at clarkin4@bloomberg.net, Divya Balji