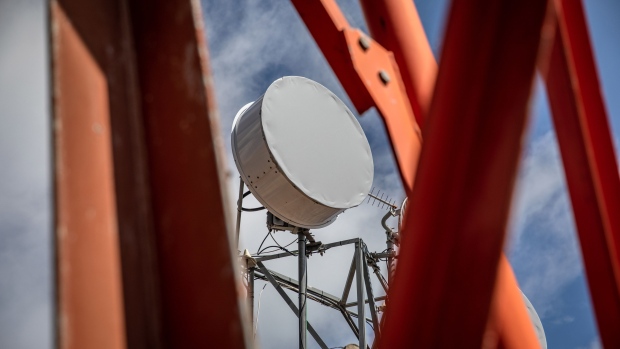 A parabolic antenna sits at the site of the the Rocacorba broadcasting tower in Girona, Spain, on Thursday July 16, 2020. Cellnex Telecom SA is considering bidding for a stake in CK Hutchison Holdings Ltd.’s European wireless tower business, according to people familiar with the matter, as it scouts for new acquisitions. Photographer: Angel Garcia/Bloomberg , Bloomberg

The Indian firm, sponsored by the $20 billion Brookfield Infrastructure Fund IV, plans to use the proceeds of the 10-year senior secured bond partly for capital expenditures and to repay debt. Initial price guidance for the notes is in the area of 215 basis points over Treasuries, according to a person familiar with the matter.

“Summit Digitel’s dollar bonds may price at 180-190 basis points above 10-year Treasury rates, which would be the tightest among BBB- rated India corporate bonds,” Sharon Chen, analyst at Bloomberg Intelligence said in a note. “Due to the scarcity of issuance from this sector, with Indonesia’s Tower Bersama as the sole issuer, Summit’s bonds may enjoy strong technical support.”

Summit Digitel joins a global rush to sell dollar bonds to lock in money at cheaper rates, thanks to a massive stimulus to battle the pandemic. Indian firms have been tapping offshore bond markets at a record pace, issuing $16.3 billion of dollar notes so far in 2021, a 75% increase from the previous year.

Reliance Jio Infocomm Ltd., the nation’s largest wireless carrier, is a major contributor to Summit Digitel’s revenues and is expected to remain so going forward, according to latest annual report by Summit’s parent Tower Infrastructure.

Summit Digitel has total borrowings of nearly 432 billion rupees ($5.8 billion) as of March 31. The company is rated BBB- by both S&P Global Ratings and Fitch Ratings, the lowest investment grade.

(Updates with a Bloomberg Intelligence comment in third paragraph.)