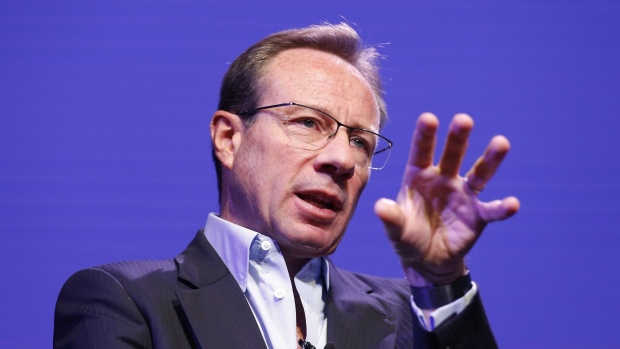 Philip Jansen, chief executive officer of BT Group Plc, gestures while speaking during a news conference in London, U.K., on Wednesday, Oct. 9, 2019. BT is making a new push to improve customer service, including the arrival of BT-branded shops for the first time in almost two decades, as Jansen begins a charm offensive to defend market share. Photographer: Bloomberg/Bloomberg , Photographer: Bloomberg/Bloomberg

(Bloomberg) -- BT Group Plc’s chief executive officer said he might consider selling a stake in network unit Openreach, in a nod to global investors who are spurning phone carriers while clamoring for a slice of their infrastructure.

In his strongest comments yet about the future of the U.K.’s largest fixed broadband network, Philip Jansen said he believes Openreach is undervalued and he needs to make sure investors recognize its true worth.

“Would I be open-minded about looking at a minority interest on it, moving that on to somebody else? Potentially,” Jansen said at Morgan Stanley’s European Technology, Media and Telecom conference on Wednesday.

“I can’t see us doing that until well after we’ve agreed the regulatory framework, which isn’t until March, April next year,” Jansen said, referring to an ongoing market review by U.K. communications watchdog Ofcom.

The relationship between BT and its pension fund would be another factor in any sale. A pension funding negotiation is due to conclude by mid-2021, and the eventual pact could give the pension plan a prior claim over BT assets such as Openreach.

BT asked advisers to bolster its takeover defenses after its stock sank to an 11-year low earlier this year. Its market capitalization remains far below the 20 billion pounds ($27 billion) or more that some analysts ascribe to Openreach alone.

Jansen stressed on Wednesday that BT wants to retain some control.

“Strategically, Openreach being part of BT is the right thing for it to be,” he said.