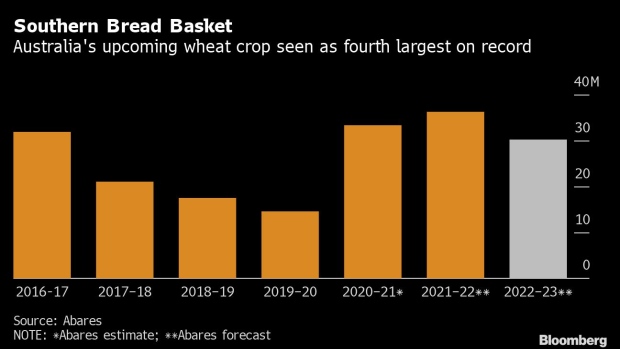 (Bloomberg) -- Australia, one of the world’s largest wheat exporters, is forecast to produce another huge harvest this season as favorable conditions encourage growers to ramp up planting of winter crops to near-record levels.

High prices and supportive seasonal conditions are prompting more sowing of wheat and canola, with planted area for wheat rising 1% and for canola expanding 12% to a record, Abares said. The increase comes at the expense of barley in most states, and chickpeas in Queensland and North South Wales.

The outlook is more downbeat than some other forecasts, with Rabobank estimating wheat and canola crops at 32.5 million and 5.8 million tons -- figures it said were “conservative” because it was so early in the season.

Still, the prospect of more supply from Australia will be welcome news for global importers, after wheat prices hit a record following Russia’s invasion of Ukraine. The conflict has slashed exports of wheat and corn from the Black Sea -- an area which normally accounts for over 25% of global wheat shipments -- and driven up costs for vital farming inputs, such as fertilizer and diesel.

Adverse weather has hit production in other major growing regions, and global wheat stockpiles are forecast to drop to a six-year low in the coming season, the US Department of Agriculture said last month.

Other points from Abares: