Bloomberg Businessweek - Billy Tung, a 28-year-old accountant, lives on Hong Kong Island in a tiny room in an apartment that’s been partitioned to accommodate six renters. His bosses expect him to work most Saturdays and Sundays, but recently he’s had another weekend activity: taking to the streets to join thousands of other Hong Kongers in protests. The demonstrations were triggered by a government proposal that would allow China to extradite those accused of crimes but have since morphed to include a broader set of demands, including the right for universal suffrage.

The protests have swamped the streets of this former British colony since June, intensifying as the long, hot summer drags on, with police frequently using tear gas and rubber bullets to clear demonstrators who’ve turned to violence at times to demand that Chief Executive Carrie Lam formally withdraw the legislation. “Citizens are willing to sacrifice the economy to fight,” says Tung, who represents a generation for whom home ownership is increasingly out of reach. Hong Kong has had the world’s least affordable real estate for nine years in a row. Property developers wield enormous market power, controlling everything from power utilities to mobile phone carriers.

Like many Hong Kongers of his generation, Tung finds it hard to save even while he carefully watches his spending on a day-to-day basis, which is why he’s been toying with the idea of moving to Taiwan. “I don’t want to spend the next 10 years working just to give it all away to Hong Kong real estate developers,” he says.

Hong Kong has long been a land of contrasts in which glittering skyscrapers and chauffeur-driven Rolls-Royces are juxtaposed with decrepit apartment blocks and “cardboard grannies” picking through rubbish in search of recyclables. An aspiration for a share of those riches has been replaced by a growing sense of hopelessness.

Ho-Fung Hung, a professor in political economics who’s a China expert at Johns Hopkins University, says the economic malaise, combined with a perceived loss of cultural identity and frustration at a lack of political voice, is driving young people into the streets. “Participants come from all economic backgrounds,” says Hung. “What binds them together is a shared sense that there is no future for them in Hong Kong. Compared with their parents, they will live a lower quality of life.”

The numbers bear that out. Median property prices climbed to 20.9 times median household income in 2018, according to Demographia, an urban planning consulting firm. That compares with 12.6 times for Vancouver and 11.7 times for Sydney—two other cities often cited as among the world’s priciest. Huge demand, coupled with constrained supply in a market dominated by a handful of developers and cashed-up buyers from the mainland, has acted as a powerful cocktail to drive up house prices.

That’s as incomes, which used to far outstrip those on the mainland, have stagnated in recent years. Wage growth for those employed in the private sector in Chinese cities and towns was 8.3 per cent in 2017-2018, according to National Bureau of Statistics, while Hong Kong’s was 3.9 per cent from January 2018 to March 2019, data from the city’s Census and Statistics Department show. 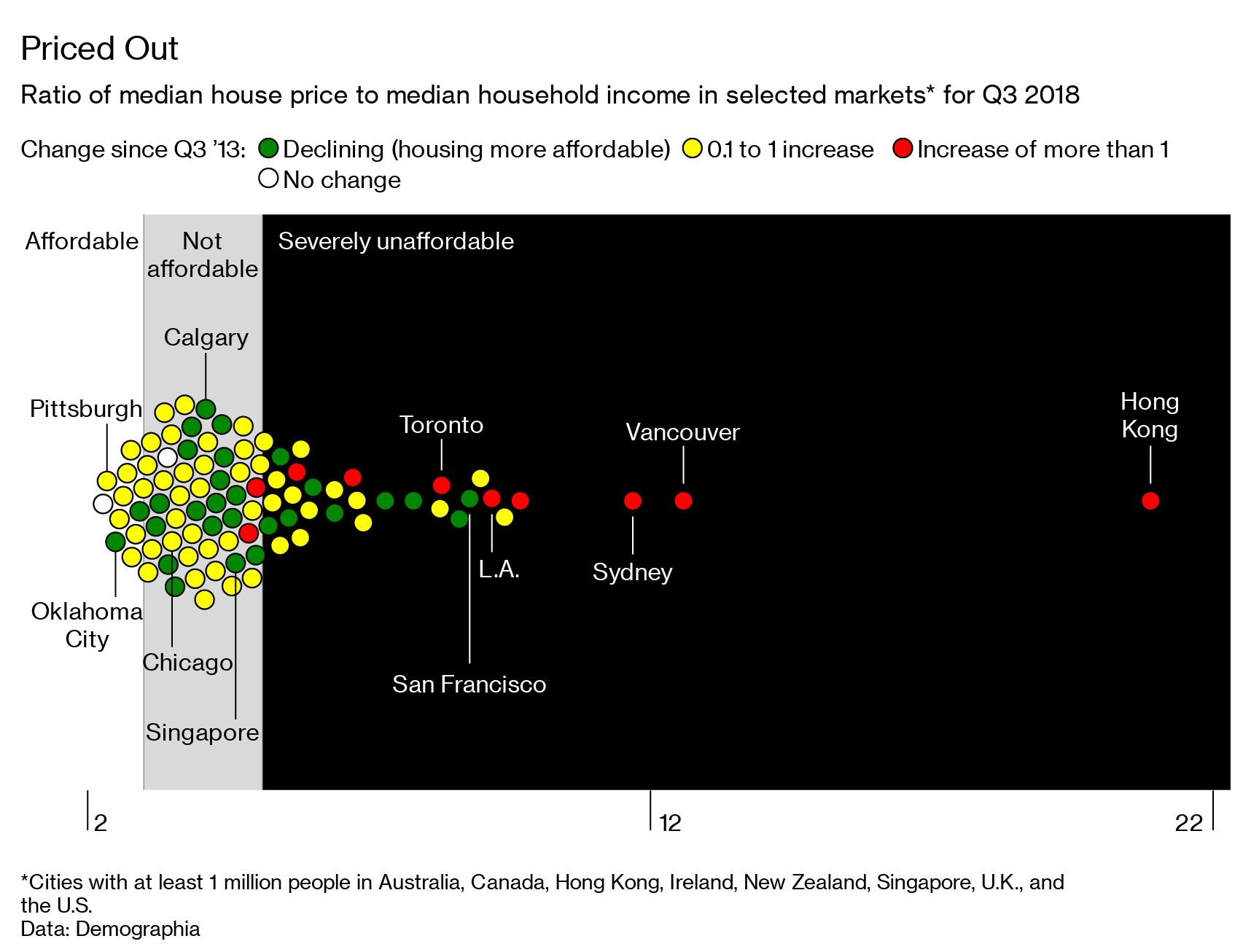 Locals often find themselves outspent in the city’s marble-clad malls by weekend visitors from Beijing, Shanghai, or Shenzhen, though in recent weeks the number of mainland visitors has fallen sharply in response to the protests. Almost 1 in 5 residents lives below the poverty level, according to a government report from 2017. It’s unlikely things have gotten much better since then, despite recent government measures authorizing a modest increase in support to the poor.

It’s not that young Hong Kongers can’t find a job. It’s more that the available work falls short of the living standards needed for a stable future. Unemployment for those age 15-24 in Hong Kong was 8 per cent at the end of 2018, according to the World Bank. In mainland China, it was 10.6 per cent.

Sze Chan, a 20-year-old who designs menus for restaurants on a freelance basis, has been on the front lines of the protests in recent weeks as police fired tear gas. “Young people in Hong Kong are very confused about the future,” she says. “Unless you get support from your family, it’s impossible for one to live. And with so little left every month, you can’t even have a decent wedding banquet when you marry, let alone buy a home.”

Chan at least has the option of still living at home, without which things would be much tougher. “The young people go on the streets not just because of the political situation—the government’s inability to address social issues plays a role, too. If it’s just about the extradition bill, there wouldn’t be so many people out protesting,” she says.

A survey by Radio Television Hong Kong, the Institute of Asia-Pacific Studies, and the Chinese University of Hong Kong conducted on June 11-18 found an increase from the previous year in the levels of dissatisfaction with all areas of public policy, including social welfare and education. That’s apparent even to some of the city’s “haves,” because “people see no hope, they look for blame,” says Allan Zeman, whose business group Lan Kwai Fong owns restaurants and property valued at more than HK$4 billion (US$510 million). “The first one you look to blame, of course, is the government, which is not helping you, and China.”

The sense of diminished opportunity is amplified by Hong Kong’s declining significance to the mainland, whose own economy has become more open as a result of market reforms. Analysis by Bloomberg Economics found that in 1992, 45 per cent of China’s total exports went to Hong Kong, compared with 12 per cent in 2018. Twenty years ago, foreign direct investment from Hong Kong was equal to 6 per cent of mainland China’s total investment; now it’s about 1 per cent. In 2000, Hong Kong’s financial sector output was 39 per cent of that on the mainland, whereas it’s 6 per cent today. While neighboring Shenzhen transformed itself from a fishing village into a global tech hub over a 40-year period, Hong Kong’s economy remains overwhelmingly dependent on revenue from banking and property, and its port now has to compete with mainland rivals.

While Lam has spoken of the economic dislocation, she has yet to come up with a plan for dealing with it, and she hasn’t shown much empathy. “They have no stake in the society which so many people have helped to build,” she said at an Aug. 9 press conference, “and that’s why they resort to all this violence and obstructions causing huge damage to the economy and to the daily life of the people.” On Tuesday, Lam offered an olive branch to protesters, pledging to immediately engage in dialogue and investigate complaints against the police. Protesters rejected spurned her offer because it fell short of their demands, raising questions about whether the two sides can reach a compromise even as they seek to lower tensions.