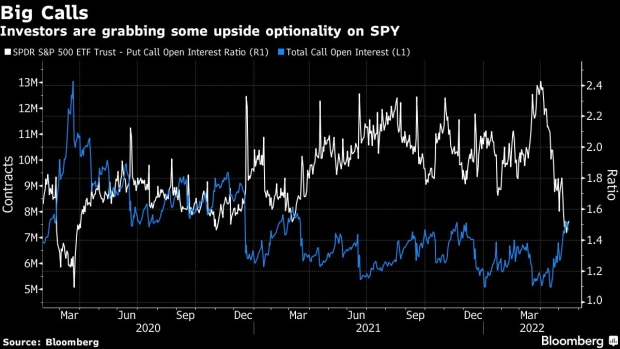 (Bloomberg) -- Bearish investors are snapping up bullish options to ensure that their defensively positioned portfolios won’t be left behind if the latest rebound in US stocks proves persistent.

Having slashed exposures or loaded up on hedges amid the past month’s equity turbulence, traders are now rushing to add calls that will help them participate in any upside -- while retaining their defensive stances overall.

The put-to-call ratio for the $361 billion SPDR S&P 500 ETF Trust ETF (ticker SPY) based on open contracts recently hit the lowest in two years, according to data compiled by Bloomberg. The same situation exists for the $163 billion Invesco QQQ Trust Series 1 ETF (QQQ), where outstanding call options have surged to the highest since 2008.

A drop in the put-call ratio is usually a bullish sign as investors prepare for a move upward. This time, though, signals from elsewhere in the market’s underbelly show traders are still guarding against declines after the S&P 500 plunged within a whisker of a bear market as the Federal Reserve stepped up its fight against inflation.

“Investors are using options to hedge themselves just in case they are wrong,” Steve Sears, president at Options Solutions, said in an interview. “If you short technology or QQQ in the stock market, for instance, you might hedge with long calls in the options market. If the stock surges the losses on short equities would be offset by long calls.”

The move looked prescient Tuesday, when tech shares led the market higher. Call options on both ETFs surged, with many of the highest-volume contracts doubling, though the gains followed equally large losses over the past two weeks. The Nasdaq 100, the index tracked by QQQ, jumped 2.6%. The S&P 500, SPY’s measure, added 2%.

Tech has been at the epicenter of a selloff this year as rising interest rates took the shine off expensive growth stocks. Even with the Tuesday bounce, QQQ has dropped over 20% in 2022.

“At least some investors are looking for low-cost upside in the QQQ,” said Chris Murphy, co-head of derivatives strategy at Susquehanna International Group. “That makes a ton of sense in a landscape where everyone is ‘under-invested,’ especially in tech. Protect yourself with upside calls.”

Evidence is emerging that everyone from systematic players to hedge funds has slashed their equity exposure to historic lows in recent weeks. That looks like one reason the CBOE SKEW Index has dropped to the lowest since 2020, as implied volatility for bearish put contracts on the S&P 500 falls relative to calls.

That can be a sign of bullishness, but this time it’s possible the cause is money being taken off the table, according to Amy Wu Silverman, an equity derivatives strategist at RBC Capital Markets.

“This is related to de-risking,” she said “Also frankly the markets are down a ton. Investors have lost money and there is simply less to hedge.”