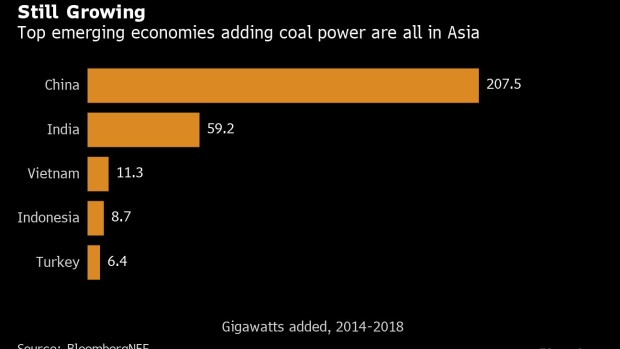 (Bloomberg) -- A critical route for American coal exports to Asia is drying up after yet another U.S. port city passed a law to bar the fuel from leaving its shores.

Lawmakers in Richmond, California, on late Tuesday voted to impose a ban on coal, targeting a terminal that handles about a quarter of exports from the U.S. West Coast.

Richmond is joining several West Coast cities that have prohibited shipping the fossil fuel through their ports, choking off key routes to one of the few coal markets in the world still growing. As utilities burn less coal in the U.S., environmentalists and lawmakers see the ordinances barring exports as a way to both limit local pollution from coal dust and reduce greenhouse gases globally.

“I’ve got bigger ambitions than just Richmond,” Mayor Tom Butt said in an interview. “I’d like to get rid of coal worldwide.”

The ordinance in Richmond targets a port operated by Levin-Richmond Terminal Corp. In 2018, the facility shipped almost 1 million metric tons of coal to Japan and South Korea. The legislation gives the port three years to stop coal shipments. The ordinance also includes petroleum coke, a byproduct of oil refining that’s another major product handled by the terminal.

Levin-Richmond Terminal’s chief executive officer, Gary Levin, has said the law would put him out of business and has threatened to sue. He didn’t respond to phone inquiries.

The city of Oakland, California, passed a law in 2016 barring coal exports. In 2014, Oregon regulators denied a permit to a proposed coal-export terminal on the Columbia River.

”Communities are pushing back on toxic and polluting coal exports,” Minda Berbeco, director of the San Francisco Bay Chapter of the Sierra Club, said by email. “No one wants to live with coal dust coating their homes and cars.”