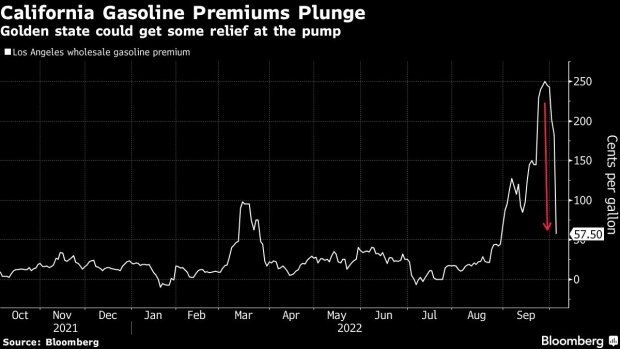 A customer refuels at a Chevron gas station in San Francisco, California, US, on Monday, Oct. 3, 2022. California Governor Gavin Newsom called for a windfall tax on oil companies and allowed for production of a cheaper blend of gasoline as the state faces a surge in fuel prices. , Bloomberg

(Bloomberg) -- Californians on the cusp of paying record-high pump prices may be in for some relief.

Wholesale gasoline premiums in Los Angeles and San Francisco plunged Wednesday to the lowest levels in more than five weeks. That could ease retail prices that -- at $6.425 a gallon -- are close to hitting a new all-time high for the second time this year.

California tends toward higher gasoline prices, with the state separated by the Rocky Mountains from the energy hubs in the Gulf Coast and Midwest. Recently prices have skyrocketed as West Coast fuel imports dry up and refinery outages limit production. Supplies are now at their lowest point in a decade.

But help is on the way, with four cargoes from Europe set to arrive on the coast in the coming days. And last week, regulators allowed the switch to cheaper winter blend gasoline a month early to help ease price pressures.