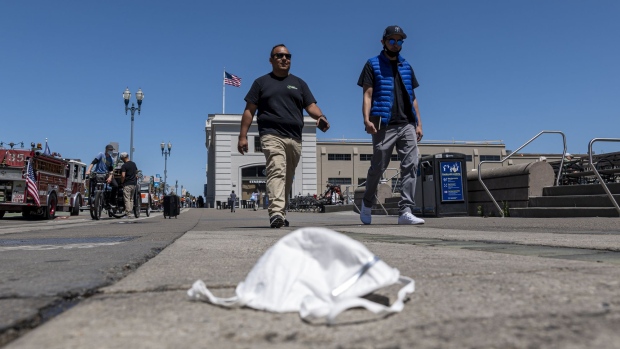 People walk past a discarded protective mask on the Embarcadero in San Francisco, California, U.S., on Tuesday, June 15, 2021. California lifted most of its Covid-19 restrictions Tuesday as part of a grand reopening in which the state will end capacity limits, physical distancing and mask requirements for those that are vaccinated. , Bloomberg

(Bloomberg) -- California fully reopened its economy, while New York lifted its remaining restrictions. The developments took place on a day when U.S. pandemic deaths topped 600,000, a grim reminder of the toll the virus has taken on the nation.

Malaysia’s royal leaders are set to meet Wednesday to discuss the pandemic-forced state of emergency, the country’s first in more than half a century.

Russia said its Sputnik vaccine works against the delta variant, which was first identified in India and whose spread has prolonged a lockdown in the U.K.

Malaysia’s royal leaders will meet Wednesday amid growing public anger over the government’s handling of the pandemic during a state of emergency that has allowed embattled Prime Minister Muhyiddin Yassin to suspend parliament and enact emergency laws without legislative approval, with the aim of bringing the outbreak under control.

The meeting, to be chaired by King Sultan Abdullah Sultan Ahmad at 2:30 p.m. local time, comes as daily Covid-19 infections averaged about 5,800 in the past seven days, nearly double than when Malaysia declared emergency rule in January.

“The issue now is whether the emergency, which is set to end Aug. 1, should be continued,” wrote Asyraf Wajdi Dusuki, who heads the youth wing of the ruling United Malays National Organisation, on Facebook Monday. “What’s the use of an emergency if it’s not helping the people?”

The Indian Ocean nation of Maldives eased a curfew in the Greater Male area which includes the capital, as new coronavirus infections continued to decline. Residents, who’d previously been confined to their homes for 16 hours a day, will be allowed out between 4 a.m. and 8 a.m. to exercise as of Wednesday and from 8 a.m. to 4 p.m. provided they get a household permit or special police authorization, Public Service Media News, a state news agency, reported on its website, citing the Health Protection Agency. Maldives has about 8,155 active Covid-19 cases.

Amazon.com Inc. has started selling its FDA-approved Covid-19 test on AmazonDx.com, STAT News reported. That web site was previously available only for the company’s employees.

California Governor Gavin Newsom marked the full reopening of the world’s fifth-largest economy Tuesday with a lottery awarding 10 vaccinated residents $1.5 million each. Speaking at Universal Studios near Los Angeles, he touted the most-populous U.S. state’s virus progress while saying he is taking variants seriously and “won’t let our guard down.”

The state -- the first to shut down, in March 2020 -- is lifting capacity limits and social distancing requirements, and removing most mask mandates for vaccinated individuals. After recording almost 3.7 million virus cases, the most in the U.S., California’s outbreak has substantially improved and it now boasts one of the lowest test-positivity rates in the country.

Italy Gives First Dose to Half Its Population (3:10 p.m. NY)

Italy has vaccinated more than 50% of its population with at least one Covid-19 vaccine dose, according to Bloomberg calculations based on government data. The country has administered 42.9 million doses, of which about 30 million are first or single-shot doses, according to the latest government data.

Nigeria expects to receive 3.92 million doses of AstraZeneca Plc’s vaccine in late July or early August, Faisal Shuaib, executive director of the country’s National Primary Healthcare Development Agency said in Abuja, the capital. The jabs are expected from international partners, Shuaib said, without naming them. Nigeria earlier received about 4 million doses of the AstraZeneca vaccine in March through the Covax initiative backed by the World Health Organization.

New York Governor Andrew Cuomo lifted the state’s pandemic mandates, saying that 70% of the state’s adult population has now had at least one dose of a vaccine.

“All across the board we can get back to living,” Cuomo said in a briefing. “The state mandates are gone.”

The last protocols that were in place included social distancing requirements, capacity restrictions, health screening and collecting contact information for tracing. Early in the pandemic, New York City had the most coronavirus cases in the world, as well as some of the strongest lockdown restrictions.

Cuomo said last week restrictions would be removed once the state hit the vaccination benchmark. Businesses in the state can opt to continue Covid-19 precautions but are not required to by law.

Scotland is unlikely to push ahead with a planned easing of coronavirus restrictions later this month amid a rise in new cases of the delta variant first discovered in India, First Minister Nicola Sturgeon said.

While a firm decision will be made next week, Sturgeon said that rising case numbers mean it’s now doubtful that Scotland will move to the lowest level of restrictions on June 28 as planned. Instead, the semi-autonomous Scottish government expects current restrictions will continue for another three weeks from that date to allow more people to get vaccinated.

Romania asked vaccine makers to delay the delivery of over 4 million doses that were scheduled for June because it has a surplus of shots after a decline in daily inoculations, according to deputy health minister Andrei Baciu. The country was supposed to get about 7 million doses in June and will only get 2.6 million.

Unvaccinated passengers arriving in Ireland from Britain will have to self-isolate for a minimum of 10 days, under tougher measures approved Tuesday, according to RTE. The visitors will have to receive a negative PCR test on day five and day ten before they can exit quarantine. Those who are vaccinated will have to quarantine at a stated address for five days, RTE said.

Sputnik’s developer Gamaleya has submitted a study for publication in an international peer-reviewed journal, it said on Twitter.