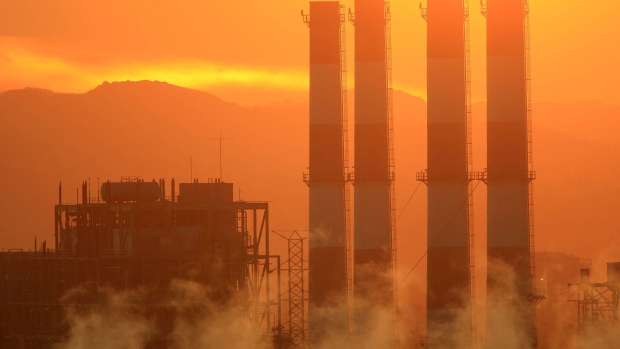 (Bloomberg) -- California’s coronavirus lockdown has dealt a blow to its cap-and-trade system, slashing the amount of money the state raises to fight climate change.

The California Air Resources Board, which runs most of the state’s climate programs, reported Thursday that only 35% of the pollution permits available in its most recently quarterly auction sold. It raised just $25 million, a 96% decrease from the previous auction in February.

Analysts had expected the auction’s results would be dismal. With much of California’s economy shut down due to the virus, the companies that emit greenhouse gases didn’t need as many permits as usual. And state officials earlier this month warned revenue from the auctions was apt to fall.

Under the system, the state sets an annual limit on emissions across its economy -- the cap -- and requires businesses to buy a permit for each ton of greenhouse gases they emit. They can buy their permits, called allowances, either at quarterly state-run auctions or on a secondary market, where companies trade them like any other financial instrument.

Proceeds from allowances offered by the state at the quarterly auctions are used to fund emission-reduction programs, including electric-vehicle rebates and subsidies for weatherproofing homes.

Analysts do not expect the system to collapse. California officials remain committed to it, and the market’s complex rules include provisions for getting rid of unneeded permits.