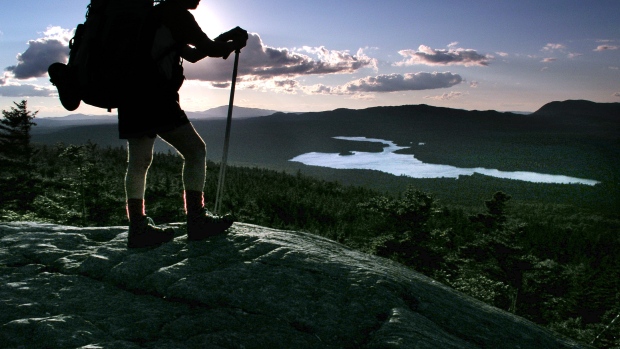 A hiker pauses on Chairback Mountain overlooking Long Pond on the 100-Mile Wilderness section of the Appalachian Trail north of Monson, Maine, in this September 2004 file photo. COVID-19 restrictions on camping site reservation and other forms of travel have led to increased demand and system bottlenecking, so when reservations opened across British Columbia on June 1, they went quickly. , Robert F. Bukaty/THE CANADIAN PRESS/AP

On her first camping trip of the summer, hiker and adventure blogger Taryn Eyton was surrounded by more company than usual.

The Vancouverite, who works as a volunteer trainer with Leave No Trace Canada, normally spends large chunks of each summer outdoors. But COVID-19 restrictions on site reservation and other forms of travel led to increased demand and system bottlenecking, so when reservations opened across B.C. on June 1, they went quickly. She and her sister were lucky to snag a few June days in a provincial park just outside of Whistler.

As an experienced camper, the packing list is something she has down pat. But for many first-timers, knowing what to bring can be a challenge - one that quickly becomes expensive if you're not careful when shopping for gear.

“A lot of people get intimidated by the idea of camping being all this gear that you need, all this special stuff,” she says. “If you go to a popular provincial park on a long weekend you'll see people with just incredible camp setups. All power to them but  you really don't need all that stuff.”

Eyton says campers on a budget should prioritize covering the necessities: Warmth and shelter.

If there's anything to spend money on, she says, it's a well-made tent. “The bare bones tent is probably going to leak or fall apart,” Eyton notes. While a high-quality tent may set you back a few hundred dollars, it's likely to last two to three times as long as one that costs closer to 50 (but if the former is outside your price range, a tarp can serve as a suitable backup to cover holes in the event of a leak.)

The same rule applies to sleeping bags, with slightly more flexibility, Eyton says. A warm, well-made sleeping bag (at a few hundred dollars) is a plus if you're planning to camp into the colder seasons, but for summer camping alone, a lighter, less expensive bag should suffice. If you're worried about getting cold, pack a few fleece or wool blankets from home as an addition.

And air mattresses, while comfortable, are not always worth it, Eyton says: Foam sleeping pads typically offer more insulation from the ground and run at a similar price point. If any piece of gear is too expensive to justify buying at all, check your local gear outfitter or MEC branch for rentals, a short-term alternative to purchasing equipment you may never use again.

Shane Devenish, executive director of the Burlington, Ontario-based Canadian Camping and RV Council, says demand for both tent and RV camping has been at an all-time high since the start of June.

“It's being perceived as one of the safest ways to go on vacation and take a road trip,” Devenish says.

Devenish notes that the budget-conscious should also take mileage into account when calculating the cost of a trip, especially in an RV or larger rental vehicle. “It's better to have the expectations before you go,” he says, “rather than disappointment, or you're pretty upset when you've got to go to the gas station so much.”

Beyond these upfront costs, camping remains one of the most affordable ways to spend a summer, Devenish adds. Eyton echoes the sentiment, and notes that an open-minded attitude and respect for nature are the only other essentials to take with you.

“It might rain, it might be cold, there might be bugs,” she says. “ Have a plan for those things and how you're going to deal with it and still have fun.”