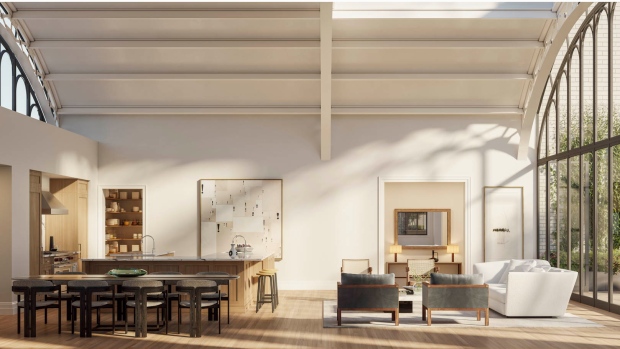 A view of the 555 West End Avenue penthouse, on New York’s Upper West Side, which goes on sale next week. , Image courtesy of HayesDavidson via Bloomberg News

The developer Cary Tamarkin bought at the top of the market. His US$50 million purchase in 2014 wasn’t a luxury apartment though; it was a former Catholic school at 555 West End Avenue, on New York’s Upper West Side.

Tamarkin and his partner, CL Investment Group of China, decided to convert the building into 13 luxury condominiums. They later announced that the apartments’ prices would start at US$7.9 million, and construction began in late 2015.

During that time, the high-end real estate market in New York began to wobble, then slump, even as developers across the city continued to bring new inventory onto the market. “I think everybody who hasn’t been living in a cave for the last four of five years understands that there’s excess supply at the high end of the market,” says Jonathan Miller, the president of Miller Samuel Inc., a real estate appraiser.

Tamarkin, a trained architect whose company, Tamarkin Co., has developed multiple high-end condominiums in New York over the last 20 years, was not in a cave and is not blind to the market. “There’s a huge amount of very expensive penthouse apartments that are lingering on the market,” he says. “There’s still a group of buyers in that price range, but the reason [apartments] are lingering, to my mind, is because the economy is questionable, and buyers don’t have to make a decision quickly these days unless there’s a sense of urgency.”

The two penthouses cost more. One, which will go on sale next week, has 3,420 square feet, not including the terrace; its asking price is US$18 million. A second, which will go on sale later, measures more than 5,000 square feet and will cost US$22.5 million. (Sotheby's International Realty and Stribling & Associates are handling the sales and marketing, with Cathy Taub and Alexa Lambert leading sales.)

Given that Tamarkin acknowledges New York’s “glut of high end apartments,” it would stand to reason that he’d pivot to cheaper, smaller apartments instead. He admits that if he did so, the units would probably move faster. “The cheaper you make apartments right now, the quicker they’re going to sell,” he says. “But it’s not like in the middle of design, we’re going to change gears and make a bunch of smaller apartments,” he continues. “We don’t feel that’s what the building calls for.”

He’s sticking with the original plan, he says, because he believes that his building is unique. “I’m banking on it being very special,” he says.

By paying particular care to the history of the former school, which was built in 1908 in a vaguely Gothic style, Tamarkin hopes to liberate himself from the market forces that have pushed more generic luxury developers to slash their prices. “The people who are actually interested in [the building] and ‘get’ it don’t have that much other inventory to choose from,” he says.

Tamarkin hopes to differentiate by filling his apartments with custom touches. At least one will be styled as a maisonette, with its own ground-floor entrance on West End Avenue. All of them will have white-oak herringbone floors, Calacatta Gold marble, and cabinets designed by Christopher Peacock, along with the usual list of expensive appliances, finishes, and touches.

The building will have a 24-hour doorman, fitness center, recreation room, bike storage, and individual storage lockers. “When I walked through it recently, I thought: We should actually raise prices,” Tamarkin says. “Not by being a greedy developer, but because we think the value is there.”

That assertion remains to be battle-tested by the New York’s current real estate market, which shows no signs of picking up soon.

“Right now, we have something in the order of four years of excess supply,” says Miller. “Even though developers are aware of the competition, it still feels like the same dialogue from five years ago, which is: ‘But I’m different.’”