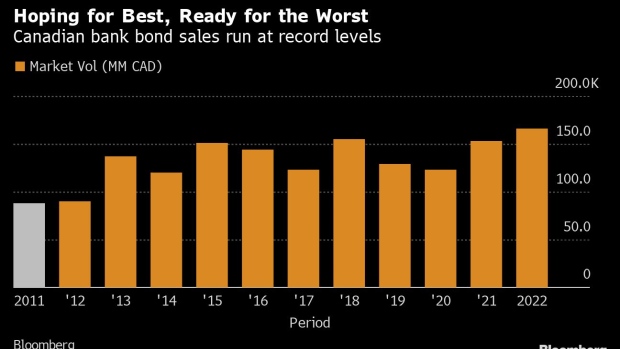 A National Bank of Canada branch in Montreal, Quebec, Canada, on Thursday, April 28, 2022. Five Canadian banks had their price targets cut an average of 6% at RBC Capital Markets on prospects that escalating macro risks could weigh on profits. Photographer: Christinne Muschi/Bloomberg , Bloomberg

(Bloomberg) -- Canadian banks have already raised more cash in bond markets than in the whole of 2021 as jitters about the global economy and conditions in the financial markets run high.

With almost seven months to go in 2022, Canadian bank sales of corporate bonds in the domestic and international markets are close to C$168 billion dollars ($133.6 billion) so far this year. That’s more than the C$153 billion raised last year and C$155 billion in 2018, the previous record, according to data compiled by Bloomberg.

The Bank of Canada raised interest rates by 50 basis points on Wednesday for a second straight time as it pushed ahead with monetary tightening and warned that it may act “more forcefully” if needed to tackle inflation thats running at the highest in three decades. That’s even as senior managers at Goldman Sachs Group Inc. and JPMorgan Chase Co. are warning of tougher times ahead amid a string of shocks rattling the global economy.

National Bank of Canada priced in the US dollar market Thursday $750 million of senior bail-in bonds, notes that are eligible for the banks’ total loss-absorbing capacity, or TLAC. Larger rival Toronto-Dominion Bank raised $5.5 billion of the same type of securities the day before as companies bring issuance forward in order to get ahead of rising funding costs.

“In an uncertain environment, optimizing liquidity and TLAC ratios becomes important,” said Yassir Berbiche, head of treasury at Desjardins Group, North America’s largest financial services co-operative. “Such large issuances can meet both of these requirements. The rise in rates combined with the reduction in central bank balance sheets will keep pressure on the yield curve as well as on credit spreads.”

On top of senior bail-in securities, banks are also selling covered bonds and deposit notes, instruments that can’t be included in the loss-absorbing buffers but help optimize market funding costs. On Wednesday, Royal Bank of Canada priced $1.6 billion of 3.4% covered bonds maturing in three years at par, data compiled by Bloomberg show. A similar-duration senior bail-in bond issued by Canada’s largest bank by assets is quoted at a yield of around 3.54%.

Also Laurentian Bank priced C$400 million of 3-year deposit notes at a spread of 173 basis points over Canadian government bonds, according to people with knowledge of the transaction. The Montreal-based lender, which on Wednesday released better than expected earnings, priced a similar transaction in December at a spread of 92 basis points.

Precautionary reasons aside, banks expect corporate borrowing to continue at a strong pace, some of the country’s largest lenders said last week. That could be in part because in an inflationary environment with a scarcity of labor, productivity becomes very important, Desjardins’ Berbiche said.

“We are most likely seeing emerging demand from the commercial sector -- which comprises medium and large companies -- which could offset the expected slowdown in the real estate sector,” he said. “In which case, these needs will result in pressure on the liquidity of financial institutions.”