Canadian employers continued hiring at a strong pace last month in an increasingly tight labor market, driving down the unemployment rate to a record low and fueling a sharp acceleration in wage gains.

The economy added 39,800 jobs in May, Statistics Canada reported Friday, surpassing the 27,500 gain anticipated by economists. The nation’s jobless rate fell to 5.1 per cent, from 5.2 per cent, bringing it to the lowest in data going back to 1976. 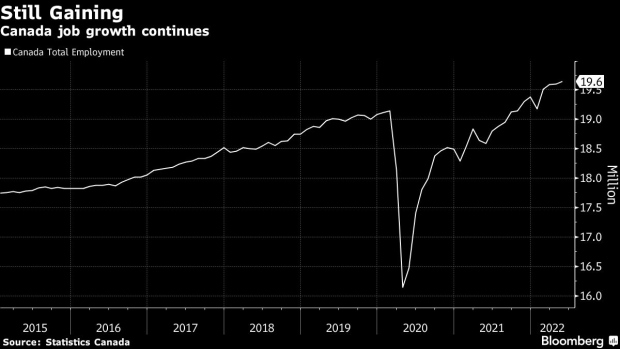 Masking the overall gain in net new jobs was a massive shift of part-time employment to full-time -- another sign of a tight labor market. Full-time employment jumped by 135,400, with part-time jobs down 95,800.

The average hourly wage rate was up 3.9 per cent from a year ago, an acceleration from 3.3 per cent in April.

The numbers illustrate the extent to which the nation’s labor market is running up against maximum employment, and will struggle to grow further without continuing to fuel wage gains. The imbalance between demand and supply of jobs is a primary reason why the Bank of Canada is tightening monetary policy so aggressively.

Officials led by Governor Tiff Macklem have increased the main policy rate to 1.5 per cent, from 0.25 per cent earlier this year, and are expected to rapidly hike borrowing costs to three per cent by October.

The Bank of Canada’s next decision will be released on July 13, with money market traders pricing in about a 50-50 chance for the central bank to accelerate its tightening and hike by 0.75 percentage points next month.

“The solid data and standout wage figure may have investors once again increasing the odds of a 75 basis point move by the Bank at its next meeting,” Andrew Grantham, an economist at Canadian Imperial Bank of Commerce, said in a report to investors.

Yields on Canadian government two-year bonds rose about 5.5 basis points from its pre-release level to 3.133 per cent as of 9:59 a.m. Ottawa time. The Canadian dollar was little changed after the report.

The bulk of the new job gains came from the unemployment ranks, with the labor force growing by just 11,800 during the month.

While the employment gain in May was more than double the 15,300 increase in April, the overall trend is slowing sharply as employers struggle to find new workers.  Employment this year has increased by about 264,000, versus an increase of about 85,000 in the labor force.

Canada’s economy has added more than one million jobs over the past year, with employment nearly half a million above February 2020 levels.

The unemployment rate, based on U.S. methodology, was 4.1 per cent in Canada in May, versus 3.6 per cent south of the border.

Hours worked were little changed in May, the statistics agency said. Overall job gains were concentrated in the retail and wholesale trade sector.

The wage gains in May were some of the strongest in records going back to the 1990s. Outside of the pandemic, when the crisis distorted labor market data, workers scored higher wage gains briefly in 2019, and more sustainably in 2007 and 2008.

Wage gains for permanent workers hit 4.5 per cent, up from 3.4 per cent in April.