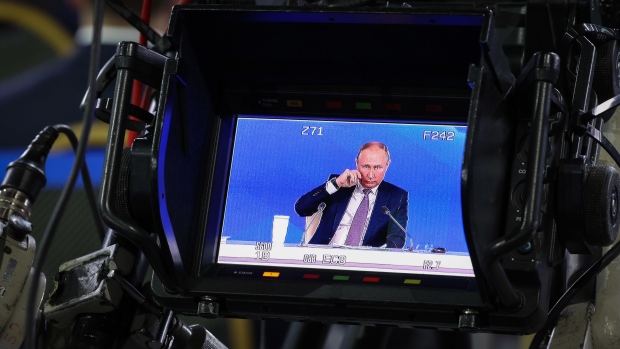 Canada’s largest television providers are removing Russia Today from their services after one of Prime Minister Justin Trudeau’s ministers said he opposed the state-owned Russian broadcaster’s presence on the nation’s airwaves.

Rogers Communications Inc., BCE Inc. and Telus Corp. said late Sunday that RT will no longer be available to their customers. The moves came one day after Heritage Minister Pablo Rodriguez said the government would look at “all options” for eliminating the Kremlin-controlled channel from the Canadian broadcasting system, amid widespread fury over Russia’s invasion of Ukraine.

A spokesperson for Rogers said RT will be turned off on Monday. A BCE spokesperson said the network is “no longer available on Bell’s channel lineup” as of Sunday night.

“We are devastated by the events unfolding in Ukraine,” Telus spokesperson Liz Sauve said in an emailed statement. In addition to kicking Russia Today off the Telus network, Telus has added a Ukrainian channel for free and is waiving long distance and texting charges for Canadian customers communicating with family in Ukraine, she said.

RT and other state-funded media outlets such as Sputnik are active participants in advancing Russian President Vladimir Putin’s geopolitical agenda, according to a paper published by the U.S. State Department in January.

“RT and Sputnik’s role as disinformation and propaganda outlets is most obvious when they report on issues of political importance to the Kremlin,” said the report from the department’s Global Engagement Center. “A prevalent example is Russia’s use of RT and Sputnik to attempt to change public opinions about Ukraine in Europe, the United States, and as far away as Latin America.”

Paula Simons, a member of Canada’s Senate, said she would be meeting with the country’s broadcast regulator on Monday to ask questions about RT.

A 2017 probe by the Globe and Mail newspaper found that Canada’s cable companies were in some cases being paid by an affiliate of RT to carry the channel. At the time, it was estimated that RT reached between 6 million and 7 million Canadian households.

Canada has an estimated 1.3 million people of Ukrainian descent, including one of the most powerful members of the government, Deputy Prime Minister Chrystia Freeland.

Freeland and Trudeau have announced multiple rounds of sanctions on Russia and Putin in response to the invasion and have openly backed the idea of cutting Russian entities out of the SWIFT financial messaging system that facilitates trillions of dollars in transactions. On the weekend, the government also banned Russian aircraft from Canadian airspace.