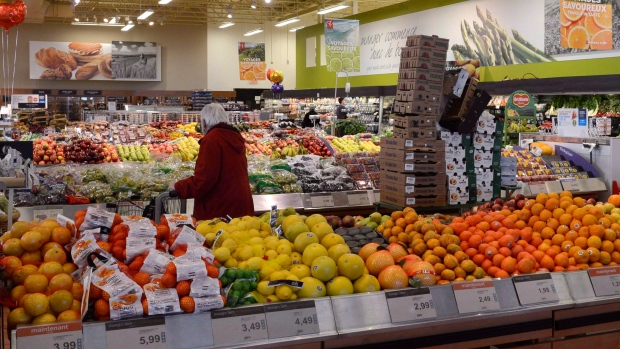 A shopper is seen in a Loblaws produce section in Montreal. , The Canadian Press

The national inflation reading for November was weaker than October's rate of 1.5 per cent, the federal agency's latest consumer price index found. A consensus of economists had predicted 1.4 per cent inflation for November, according to Thomson Reuters.

Taken together, the fresh numbers for retail sales and inflation should be seen as a positive, said CIBC chief economist Avery Shenfeld.

"This was a bit of a Christmas present for the Canadian economy in the sense that we had some heat in retail activity, but the tame readings on inflation will allow the Bank of Canada to stay with very low interest rates that's helping spur some of the consumption spending," Shenfeld said in an interview.

The Statistics Canada report said lower prices for fresh produce, meat and travel tours compared to a year earlier helped pull down the overall inflation rate. The cost of lettuce fell 18.7 per cent, tomatoes dropped 11 per cent and travel tours declined 4.2 per cent.

The federal agency said higher costs for items like automobiles, homeowners' insurance and electricity helped contribute to the upward forces behind the overall rate. Home and mortgage insurance was up 4.4 per cent compared to the year before, while the cost of purchasing and leasing vehicles rose three per cent and electricity bills climbed 3.5 per cent.

Statistics Canada said the biggest boosts came from higher sales at gasoline pumps, where they rose 3.8 per cent, and at general merchandise stores, which saw an increase of 1.9 per cent.

Revised figures showed that month-over-month retail sales rose 0.8 per cent in September and 0.2 per cent in August. Those increases followed a decline of 0.1 per cent in July.

Shenfeld said he thought there could be an "upside surprise" in Thursday's retail trade figures, but the results was "even brighter" than he had expected.

He said the strength in the retail numbers is likely connected to the federal government's enhanced child-benefit program, which started distributing cheques in July.

National Bank senior economist Krishen Rangasamy wrote in a research note to clients that he was particularly encouraged by data that showed a continued rise in discretionary spending. This means, he added, purchases other than groceries, gasoline and personal-care items.

For the first time, Statistics Canada released also three new measures of core inflation that the Bank of Canada will use to examine the underlying rate.

The change, announced in October, was made in an effort to manage the risks associated with the shortcomings of having just one indicator.

The three new indicators -- known as CPI-common, CPI-median and CPI-trim -- all showed weaker year-over-year inflation for November than their readings for October. CPI-common had a reading last month of 1.3 per cent, CPI-median had 1.9 per cent and CPI-trim had 1.6 per cent.

Here's what happened in the provinces and territories (previous month in brackets):