Canada has joined the U.S. in the inverted yield curve club, signaling a growing risk of recession that may keep Stephen Poloz on hold for his final 14 months as head of Canada’s central bank.

The yield on Canada’s 10-year bond dipped to 1.57 per cent Monday, or 10 basis points lower than the rate on the three-month Treasury bill, compared with a gap of 6 basis points Friday. That inversion hasn’t happened since 2007, at the start of the financial crisis sparked by a U.S. housing crash. The 10-year inflation-linked bond, meanwhile, offers a negative yield in real terms, after accounting for consumer prices.

The so-called inverted yield curves in both the U.S. and Canada reflect concerns that a global economic slowdown will keep the Federal Reserve and the Bank of Canada from raising rates - and may even prompt a rate cut if it worsens.

“A rate cut would require signs that the economy is declining,” said Craig Alexander, chief economist at Deloitte Canada, in a television interview with BNN Bloomberg Friday. Still “the inverted yield curve is troubling. Inverted curves have often been accompanied by recession.”

Yields on government bonds have fallen in recent weeks amid weakening economic data in Canada, including lower than expected growth in the last quarter of 2018. The Federal Reserve Wednesday tilted even more dovish and the German bond yield returned to zero Friday as Europe’s largest economy weakens.

“Signs of a global slowdown are real,” said Alexander, who has also worked at the Conference Board of Canada and Toronto-Dominion Bank. “This certainly puts the Bank of Canada on hold.”

Investors are buying top-rated government securities in Canada as retail sales unexpectedly declined in January, reinforcing concerns that consumers may no longer be able to drive the economy with household debt at record levels and borrowers facing higher costs following five rate hikes by the Bank of Canada. Economists forecast growth of 1.5 per cent this year, down from 1.8 per cent in 2018, according to Bloomberg surveys.

“The yield curve is the best economist out there” and shouldn’t be ignored, said Benjamin Tal, deputy chief economist at Canadian Imperial Bank of Commerce, in an interview Monday with BNN Bloomberg. 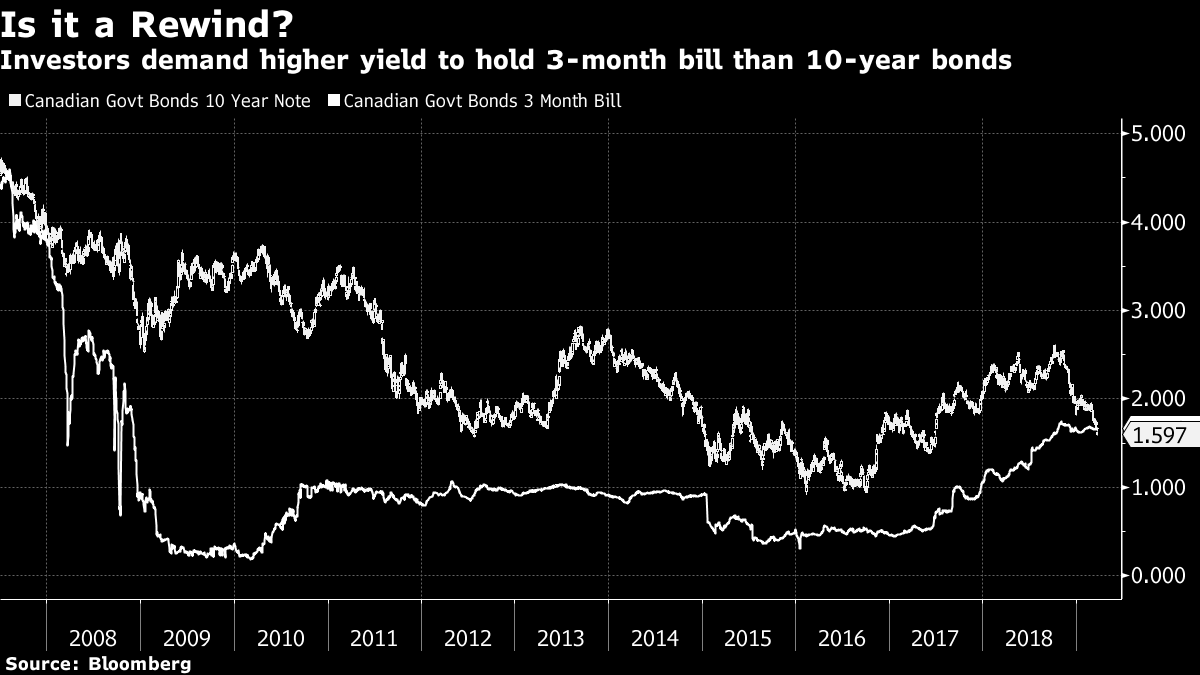 While the inversion of the curve is a wider trend in developed markets from New Zealand to Germany, Canada’s curve suggests that the outlook for its economy “has deteriorated more than most,” said Greg Gibbs, a founder of Amplifying Global FX Capital, in a note to investors. “Canadian real long-term yields have fallen more abruptly than in the USA, into negative territory.”

The yield on the government of Canada 10-year inflation-indexed bond has turned negative, Gibbs points out in his note.

Canadian bond investors have been rewarded by the plunging yields, with an aggregate index of Canadian debt returning 4.1 per cent this year, compared with a 2.6 per cent gain for a comparable U.S. gauge, according to Bloomberg Barclays indexes.

Investors appear to be betting on a pause by the Bank of Canada for now. Toronto-Dominion earlier this month shifted its view and now expects the overnight rate to remain at 1.75 per cent through the end of 2020. That would mean Poloz has already made the last rate hike of his tenure, which ends in June 2020.

If there is any move this year, it’s more likely to be a cut, based on trading in the swaps market. Chances of a rate cut at the Bank of Canada meeting in September have risen to about 36 per cent, from 23 per cent a week ago, according to swaps rates. Traders assign close to a zero per cent chance of a hike by then. There is a 29 per cent chance of a rate cut at the July meeting.