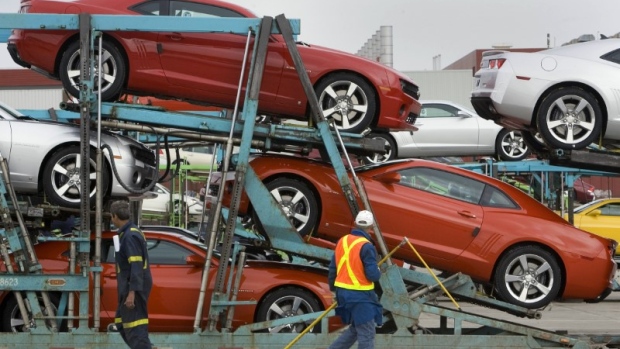 OTTAWA -- The federal government has sent a blunt warning to the Trump administration -- if it slaps Canada with auto tariffs, Canada will hit back.

Canada's deputy ambassador to the U.S. delivered the message Thursday in Washington during testimony at U.S. Commerce Department hearings. The department is investigating whether duties should be applied based on the premise auto imports pose a national security risk to the U.S.

Putting levies on the highly integrated, economically critical North American auto industry and its supply chains would lead to large-scale layoffs on both sides of the border, numerous experts have argued.

The talk of auto tariffs comes at a time when the next-door neighbours are already engaged in an unprecedented trade dispute.

In June, the Trump administration imposed tariffs on steel and aluminum imports. The move prompted Canada to retaliate with reciprocal duties of its own on imports of the metals from the U.S., as well as dozens of other consumer products.

"Should this investigation ultimately result in the application of tariffs on autos, Canada will once again be forced to respond in a proportional manner," Hillman told the hearings.

"Maintaining open trade in autos and auto parts between our countries is crucial to the economic well-being of our companies, our communities and our workers, which, in turn, supports our collective security. We urge you to reflect on these matters as you prepare your recommendations."

Trump has proposed tariffs of 25 per cent in a decision he insists would help American workers. His administration has expressed concerns that, for decades, foreign imports have eaten away at the U.S. auto industry.

Hillman rejected the idea that Canada could represent a risk for U.S. national security. She argued that American contingency planners have long considered Canadian industrial centres as key sources of reserve capacity in the event of an attack on the U.S.

"In this investigation, you are being asked to examine a specific industrial sector: automobiles and auto parts. Not tanks. Not battleships. Civilian passenger vehicles and parts," she said.

"So where's the nexus between civilian vehicles and national security? There is none and there's no basis for finding one."

Jim Wilson, the Ontario government's minister for economic development and trade, also voiced concerns at Thursday's hearings. The province, which relies heavily on the auto sector, would suffer a big blow from U.S. levies.

"If auto tariffs are imposed, everybody loses," Wilson said.

At the start of the hearings, U.S. Commerce Secretary Wilbur Ross said "it's clearly too early to say" if the investigation will ultimately result in a recommendation that tariffs be introduced based on national security grounds.

"But President Trump does understand how indispensable the U.S. automobile industry is," Ross said.

For the next several hours, U.S. industry leaders -- one after another -- testified that auto tariffs would inflict significant economic damage. They pleaded with the administration to back away from its threats.

They warned the duties would hurt competitiveness, drive up prices on cars and trucks and trigger major job losses.

"We appreciate the desire to strengthen our trade agreements to better achieve a level playing field -- but tariffs are the wrong approach," said Jennifer Thomas, vice-president of federal government affairs for the Alliance of Automobile Manufacturers.

"The opposition is widespread and deep because the consequences are alarming. Higher tariffs will harm American workers, families and the economy. Simply put, tariffs are a massive tax on consumers."

Ann Wilson of the Motor & Equipment Manufacturers Association said the tariffs would lead to significant job cuts within six months of their application and delay or eliminate research and development. Wilson warned that if tariffs were to make auto components too costly, then suppliers and vehicle manufacturers would be forced to move production outside the U.S.

Out of all the witnesses Thursday morning, only one voiced support for auto-tariff investigation.

Jennifer Kelly, director of research for the United Automobile Workers, said decades of weaker investment as well as the movement of auto jobs to low-wage places like China and Mexico by U.S. corporations has sapped the country's security.

"We believe a comprehensive investigation into the impact of the loss of auto-manufacturing and its consequences for our national security and economic well-being is long overdue," said Thomas, who also called for a careful study before the administration takes any steps that will affect the complex global industry.

"We caution that any rash actions could have unforeseen consequences, including mass layoffs of American workers. But that doesn't mean we should do nothing."

The debate over auto tariffs is in the spotlight at a deeply uncertain time in the Canada-U.S. business relationship.

Trump's steel and aluminum tariffs are based on the premise that they represent a national security threat -- the same assertion under investigation for the proposed auto duties. This week, the U.S. announced another national security probe into possible duties on U.S. uranium imports.