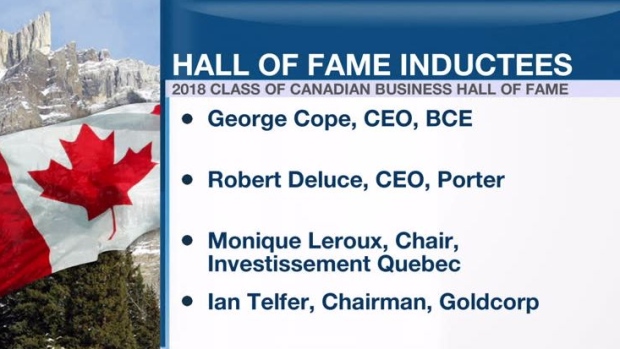 Cope was appointed president and CEO of BCE and Bell Canada in July 2008 and named Canada’s Outstanding CEO of the Year in 2015. He is being recognized for his leadership of Canada’s largest communications company.

Deluce is already a member of Canada’s Aviation Hall of Fame. He has been recognized as one of Canada’s most knowledgeable and respected airline owners and operators.

Leroux is the former president of Desjardins Group and one of the most prominent business leaders in Quebec. Last year, she was appointed to head a task force consisting of some of Quebec’s biggest names in business to find new ways to grow the provincial economy.

Telfer has been chairman of Goldcorp since 2006 and was CEO of the company and its predecessor – Wheaton River Minerals – since 2001. Telfer is already a member of the Canadian Mining Hall of Fame, and the British Columbia Business Hall of Fame. During his time at Goldcorp he helped transform the company into one of Canada’s most powerful mining companies.