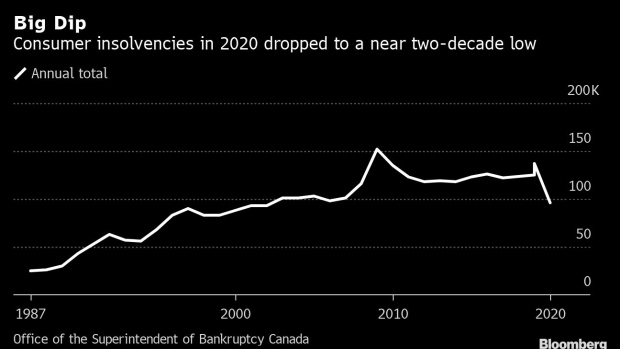 The drop in bankrupticies represents perhaps the starkest metric for what has been the biggest economic surprise over the past year: the sharp improvement of Canadian household finances during the pandemic.

Income support from the federal government and payment holidays from lenders kept Canadian households from fraying during the worst months of the pandemic, even as more than 3 million people were thrown out of work. Official data from Statistics Canada showed disposable income and savings rates actually increased during the lockdowns.

“With households having more income on average, that accounts for a lot of this diminution in activity,” André Bolduc, executive board member at the Canadian Association of Insolvency and Restructuring Professionals, said in a phone interview. “But in addition to that, creditors were not enforcing, people were getting deferrals.”

But there are indications things may be gradually returning to normal. Fourth-quarter insolvencies jumped 13% from the three months before that, the largest quarterly increase since 2009.

The federal government has been paring back transfers and creditors are becoming less lenient toward missed payments.

“Insolvency rates are creeping back up to more normal levels,” said Bolduc, who’s also a trustee at BDO Debt Solutions in Ottawa. “In our office, I see it from people that we meet, I know that collection activities are going up.”