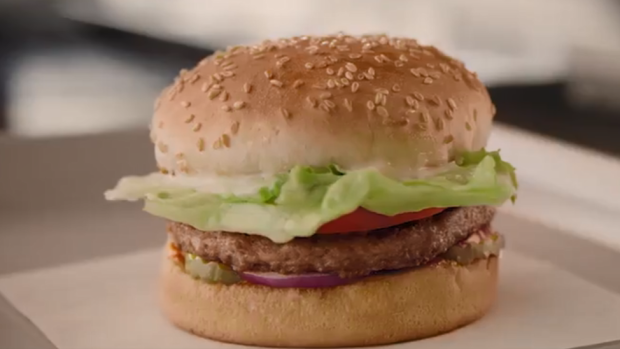 A&W Canada's Beyond Meat Burger is an example of recent efforts to lure vegan and vegetarian diners back to fast food. , Image courtesy of A&W Canada (@AWCanada) via Twitter

The once meat-dominated world of fast-food and casual restaurants is starting to cater to the one-in-ten Canadian diners who identify as vegetarian or vegan by adding an increasing array of alternative proteins to their menus.

Restaurants are the latest link of the food chain taking notice that more consumers are turning to alternative protein because of high meat prices, as well as environmental, humanitarian and health reasons.

About seven per cent of Canadians consider themselves vegetarians and 2.3 per cent identify as vegans -- levels that were not previously known, according to a poll conducted earlier this year by Dalhousie University.

That accounts for about one-in-ten diners and grocery shoppers.

Food manufacturers have gobbled up plant-based protein makers and grocery stores have started carrying a wider array of meat alternatives.

"This has been building for more than a generation, but only began taking off about five years ago," Michael Whiteman, president of Baum+Whiteman, a food and restaurant consultancy firm, said in an email.

Baum+Whiteman predicts plant-based food hitting the mainstream will be the biggest trend in restaurant dining this year.

Until very recently, supermarkets have been ground zero for the big expansion of plant-based foods, he said, adding over the last decade sections devoted to vegetarian products doubled, and sometimes tripled, in size.

Even food manufacturers closely associated with the meat industry have started to jump aboard the trend.

The meat processor's acquisitions are part of the company's ambitious rebranding strategy for a health-conscious era, complete with a new goal: "to be the most sustainable protein company on earth."

But the world of fast food has, until recently, lagged behind, often with nary a veggie burger to be found at some of the biggest brands in the food court.

A&W Food Services of Canada Inc. (AW_u.TO) last month launched a plant-based burger made by Beyond Meat, a celebrity-backed California-based company whose burger uses ingredients including beet, coconut oil and potato starch to mimic beef's colouring, juiciness and chew. Last week, the company announced the burgers were temporarily out of stock.

The demand is largely being driven by millenials. The Dalhousie report showed that among the Canadians who identified as vegetarians and vegans, more than half were under the age of 35.

Millennials -- a younger generation now in their 20s and 30s -- tend to be concerned about health and beauty, as well as animal welfare.

But baby boomers born near the end of the Second World War and now reaching their senior years are also increasingly looking to meat-alternatives amid concerns about extending their lives, said Whiteman.

Rising beef prices and concern around antibiotic use in agriculture may also be pushing consumers toward alternative proteins, Robert Carter, executive director of foodservice for market-research firm NPD Group.

But in the end, Carter said, the main impetus for the trend is the improvement in vegetarian and vegan options, which have come a long way in satisfying taste buds since they first started to appear.

"The innovation within the vegan meal categories has really improved dramatically... so that it actually really tastes good."