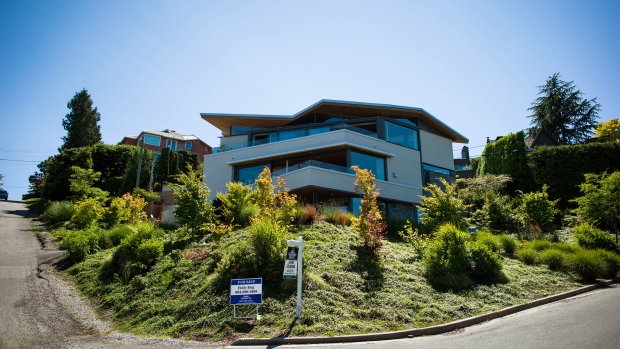 A home for sale in the Point Grey neighborhood of Vancouver, on Friday, June 17, 2016. , Darryl Dyck/Bloomberg

OTTAWA - The Canadian Real Estate Association says home sales rose 11.5 per cent in January compared with a year earlier to reach the highest sales figures for the month in 12 years, even as new listings remain constrained.

The association says seasonally-adjusted sales fell 2.9 per cent in January from a month earlier, dragged down by a roughly 18 per cent drop in sales in the Lower Mainland of British Columbia.

The actual average price for homes sold in January was about $504,350, up 11.2 per cent from the same month a year earlier for the largest increase since mid-2016.

Removing the Greater Vancouver Area and Greater Toronto Area from the picture, the national average price falls to around $395,000.

Home prices declined slightly in Greater Vancouver and in Prairie cities, while Montreal and cities in Ontario saw strong gains.

Prices rose as new listings remain near decade lows, though they edged up 0.2 per cent in January from December.