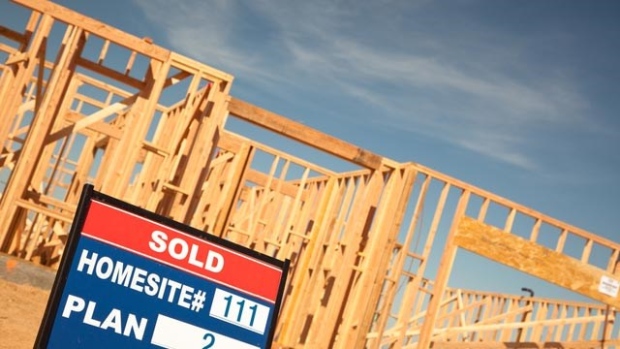 Canadian housing starts dipped in September, but did not fall as much as expected, capping another quarter of strong home building growth, but a drop in August building permits suggested the long boom is cooling, separate reports showed on Tuesday.

Groundbreaking on homes edged slightly lower in September to 217,118 units from August's upwardly revised 225,918 as a 10.7 per cent drop in multiple starts, typically condos, outweighed an 8.2 per cent climb in single starts, the Canada Mortgage and Housing Corporation said.

Analysts had expected starts to cool to a 210,000 annual rate but construction continued to defy expectations for a pullback after a near decade-long boom.

"Canadian homebuilding activity remains robust, with the best population growth in 25 years proving fundamental support. And, after declining modestly in the second quarter, residential investment looks to have added to growth again in the third quarter," BMO senior economist Robert Kavcic wrote in a client note.

Canada's long housing boom has shown signs of cooling, particularly in the nation's largest city, Toronto, where the introduction in April of a foreign buyers tax has doused sales and ended many of the bidding wars that had become a hallmark of the city's overheated market.

A separate report from Statistics Canada showed the value of Canadian building permits fell more than expected in August, the second straight monthly decrease, on lower construction intentions for multifamily homes as well as industrial facilities.

The 5.5 per cent decrease in total building permits surpassed forecasts for a decline of 1.0 per cent and suggested that the building boom will slow in the months ahead. July figures were revised to show a decrease of 2.8 per cent from the previously reported 3.5 per cent fall.

"Despite the drop (in housing starts) in September, Canadian residential construction remains at a level that is higher than demographic needs," said Krishen Rangasamy, senior economist at National Bank Financial, estimating that a 190,000 pace of starts would meet demographic needs.

"Based on declining permit applications, a moderation is in the cards for residential construction in the last quarter of 2017," he added in a research note.

Nonresidential building permits fell 10.0 per cent in August as construction intentions for industrial, commercial and institutional buildings all declined.

Residential permits fell 2.8 per cent as a 6.0 per cent drop in multifamily building permits offset a 0.4 per cent increase in plans to build single-family homes.