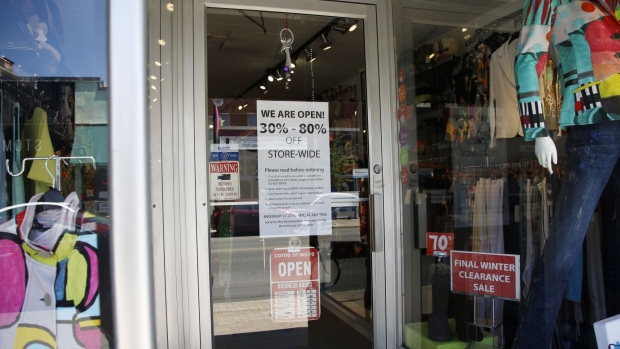 Rules are displayed in the window of a clothing store in Ottawa, Ontario, Canada, on Wednesday, May 20, 2020. Ontario has allowed the reopening of most stores, except for those in shopping malls. Photographer: David Kawai/Bloomberg , Bloomberg

(Bloomberg) -- Canadian retail sales plunged in March by the most on record as the sector was hit by the pandemic induced shutdown.

Retailers sold 10% fewer goods in March than February, Statistics Canada said Friday in Ottawa. That was in line with economist expectations for an 11% drop. The drop was driven primarily by collapsing car sales, which plunged 36%. Excluding autos, sales were down just 0.4%

Nationwide lockdowns and surging unemployment have been curtailing consumer spending, with the damage only likely to have worsened in April when strict social distancing measures and the closing of nonessential businesses were in effect for the entire month. Only a limited number of retailers like supermarkets and pharmacies have been allowed to stay open during the crisis.

Stores that remained open saw a surge in sales, particularly supermarkets. Food and beverage retailers recorded a 23% jump in March. Based on respondent feedback, about 40% of retailers closed their doors during March, Statistics Canada said.

In volume terms, which strip out the effects of price changes, March sales fell 8.2%.